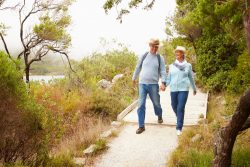 A new study has shown that in aging people that have memory impairments walking briskly can improve thinking and brain health. Researchers at the Univ. of Texas Southwestern Medical Center in Dallas conducted the study with 70 people aged 55 or older that were considered as sedentary. They all had been diagnosed with mild cases of cognitive impairment. They asked them to start increasing their level of movement.

Before the study, they lab tested the participants on their current health and cognitive function and aerobic fitness. With certain techniques and advanced ultrasounds they then calculated how stiff the carotid artery was. This result shows the amount of blood that is flowing to and through the brain.

They divided the participants into 2 groups. The first group began performing light stretching and exercises aimed at toning the body. This served as the active control group. This group kept their heart rates and breathing to a minimum. The second group was asked to perform aerobic exercises primarily by walking on a treadmill. After a few weeks, this group then walked outside by keeping their exertions brisk to raise their heart rates and breathing.

Both groups performed this routine three times per week under supervision and for around a half an hour. They continued this for six months and slowly added more sessions to slowly increase their workout sessions to five per week. The groups continued these routines for a year, where, about 20 participants dropped out, mostly from the second group.

The participants were then retested at the lab and the results were compared. The second group‘s results showed that they were more fit with increased aerobic capacity while the first group showed no improvement. The carotid arteries of the second group showed greater blood flow throughout and to their brains.

The most important result was that the second group performed better on thinking skills. These skills involve planning and decision making and tend to decline earlier with the onset of dimentia. Both groups did raise their scores somewhat on tests concerning thinking and memory roughly the same amount. It seems just moving in some way appears to help the healthy flow of blood to the brain and reduce any decline in thinking.

As a person gets older, our ability to think and remember normally dulls slightly. It is common for many people to show a decline in blood flow to the brain, when their hearts weaken and arteries stiffen. But when memory loss intensifies, a medical condition called mild cognitive impairment can occur. If it continues, a person is at a higher risk of getting Alzheimer‘s later in life. The reason for mild cognitive impairment is not known but blood flow to the brain changes may contribute to it.

This study shows that exercise can increase blood flow to the brain, even when people are just performing stretching and toning exercises. The researchers do believe that over an extended time period, walking briskly results in cognitive gains and less memory decline than just stretching. It was noted that it could take more than a year to show improved cognition from the improved blood flow to the brain. They will continue to investigate how adding or decreasing the exercise sessions each week might help the brain. They also are working on ways to help motivate the participants to continue with the exercises.