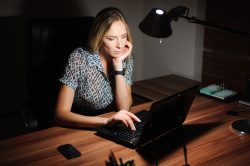 If you suffer from depression, a new study just might help you. A person could reduce their risk of having major depression by 23% by adjusting their sleep schedule according to a genetic study published May 26, 2021. The study consisted of 840,000 participants and was conducted by the Univ. of Colorado at Boulder and the Broad Institute of MIT and Harvard. It’s one of the first studies to signify what can influence mental health based on how much or how little change is required.

Researchers have often wondered how the relationship between mood and sleep timing has on a person. This study reveals strong evidence that a person’s certain sleep time influences their mood. Just going to sleep an hour earlier than usual, a person’s risk of depression is significantly lowered.

From previous studies it has been learned that early risers are less likely to suffer from depression than night owls. But it has been hard to decipher what causes it since mood disorders can disrupt normal sleep patterns. So to find out, data from a DNA testing company was used. A method called “Mendelian randomization” helped decipher genetic associations as to cause and effect.

Of the most common genetic variants, more than 340 were used that could affect a person’s chronotype or their behavior to sleep at a certain time. 850,000 participants were assessed their de-identified genetic data and the researchers also had 85,000 people wear a sleep tracker for 7 days. The study included 250,000 people that filled out a sleep preference questionnaire. This was to give them a more finite picture, even down to the hour of how the gene variants influence sleep and wake up times a person has.

The participants were divided into three groups. One-third identified themselves as morning larks. The second group, the night owls, were about 9% and all of the rest were somewhere in the middle. The researchers took into consideration a person’s genetic information, their diagnosis of any mental disorders, and medical and prescription records.

The data suggests that those people that have genetic variants that predispose them to wake up early do have a lower risk of depression. If you are already an early riser, it was unclear if a person could benefit from waking up earlier. Because early risers have a greater amount of daylight exposure, the research suggests this could benefit their hormones and influence mood.

If a person goes to sleep even one hour earlier it correlated with a lower risk of depression by 23%. If they would go to sleep two hours earlier and slept the same amount they could cut it by 40%. So people that normally stay up late in the evening could benefit from an earlier bedtime. So if you can shift to an earlier sleep pattern, it may be beneficial and possibly lower your risk of depression.