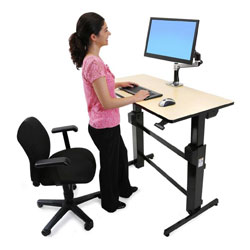 During the past few years a number of studies have been published showing that sitting for long periods of time may decrease lifespan and contribute to other health problems. Now new research has studied the opposite side of this. Instead of measuring only the negative effects of prolonged sitting the scientists measured the benefits of standing. Interestingly it turns out that standing contributes to longevity and longer telomeres!

Research conducted by a team at the Karolinska Hospital in Sweden found that decreasing the amount of time elderly people spend sitting protects the DNA. Additionally, standing was associated with longer telomeres. As many of our readers know telomeres are caps which protect the end of chromosomes and the genetic code inside them. They are important for cell division and also ensure the genetic code is passed on to new cells. Telomeres are compared to the plastic tip at the end of shoelaces which protect the shoelace. Each time a cell divides, the telomeres are shortened. When telomeres become too short, cell division will stop. These shorter telomeres are indicators of disease, aging and early death. We can have as many as 8000 – 10,000 base pairs of telomeres when we are born. Every time a cell divides it loses base pairs of telomeres. As people age the number decreases to 5000 or less at which time cells become senescent and can no longer reproduce. Senescent cells also may malfunction and start producing free radicals and other toxins that can damage adjacent cells.

Dr. Mai-Lis Hellenius who led the Karolinska team, observed 49 predominantly overweight and sedentary adults, all in their late 60?s. Half of the group took part in a six month exercise regime while the other half did not take part in any physical activity. Blood was taken from each individual at the beginning of the six months and then at the end of the six months. The groups were assessed using a diary, questionnaire and pedometer to measure the total number of footsteps taken each day. The group who reduced their time spent sitting and increased their exercise were associated with telomere lengthening. The other less active group, exhibited shortened telomeres. The reduction in sitting time was of the greatest importance than in an increase in exercise time. While exercise indicates an overall healthier profile, the most significant factor appears to be home much time people spend sitting.

Dr. Joan Vernikos, former director of NASA?s Life Sciences, has observed that when astronauts returned from space they had lost muscle tissue and had experienced other damage to this health. Their sedentary lifestyle while in space contributed to a host of health issues another indicator that sitting for long periods of time was damaging to a person?s overall health and aging processes.

Stand up more and live longer! A sedentary lifestyle increases risk of death. Standing will contribute to better posture, increased energy and a lower risk for a host of serious diseases. So take a standing break as often as possible. If you have a desk job consider getting sit/stand desk which allows for raising the height to periodically work from a standing position. Another option is to set a timer and take a walking break for a few minutes every half hour or so. This also applies to any sitting whether watching television or prolonged driving. Get up and stretch, pace around or go outside and take a breath of fresh air! Protect your DNA and your telomeres by standing up for health!

Abstract: Generation of induced pluripotent stem cells typically requires the ectopic expression of transcription factors to reactivate the pluripotency network. However, it remains largely unclear what remodeling events on endogenous chromatin trigger reprogramming toward induced pluripotent stem cells (iPSCs). Toward this end, we employed CRISPR activation to precisely target and remodel endogenous gene loci of Oct4 and Sox2. Interestingly, we found that single-locus targeting of Sox2 was sufficient to remodel and activate Sox2, which was followed by the induction of other pluripotent genes and establishment of the pluripotency network. Simultaneous remodeling of the Oct4 promoter and enhancer also triggered reprogramming. Authentic pluripotent cell lines were established in both cases. Finally, we showed that targeted manipulation of histone acetylation at the Oct4 gene locus could also initiate reprogramming. Our study generated authentic iPSCs with CRISPR activation through precise epigenetic remodeling of endogenous loci and shed light on how targeted chromatin remodeling triggers pluripotency induction.