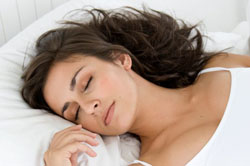 A good night?s sleep makes an important contribution to our health while a poor night?s sleep has a negative effect. A new study published in the Nature Communications Journal by the University of Zurich and the Swiss Federal Institute of Technology in Zurich has discovered there is a connection between deep sleep and learning efficiency.

The researchers set out to examine how disturbed deep sleep affects the brain?s ability to learn new things. More specifically, the researchers were interested in the brain?s ability to adapt and change in response to stimuli received from the environment in the motor cortex and how it is affected by deep sleep. The motor cortex is the part of the brain that is responsible for controlling and developing motor skills. The deep sleep phase, also referred to as the slow-wave sleep phase, is key to memory processing and formation and additionally helps the brain restore itself after daytime activity.

The study included seven men and six women. All were asked to perform motoric tasks during the day followed by a night of undisturbed sleep followed by a night during which time their deep sleep was disturbed. The daytime tasks involved a variety of finger movements, and the researchers identified precisely the area of the brain responsible for learning movements. Using an electroencephalogram, the researchers monitored the brain activity while the participants slept.

On the first night following the first session of learning movements, the participants were able to sleep without disturbances. During the second night of the study, the researchers manipulated the quality of sleep. They focused on the motor cortex while disrupting deep sleep therefore studying the impact poor, disturbed sleep has on the neuroplasticity associated with practicing new movements. None of the participants knew their deep sleep was being tampered with. To them, quality of sleep was identical both nights.

Researchers then studied each participant?s ability to learn new movements. The participants learning performance was at its highest in the morning as expected. However, as the day progressed, more and more mistakes were made which again was as expected.
What the researchers found after a restorative night?s sleep was the participants learning efficiency spiked again. However, following the night of disturbed, manipulative sleep, the learning efficiency did not improve as significantly and the participant?s performance was as low in the morning as it was on the evening of the previous day.

According to the researchers, during manipulated deep sleep the neuron?s synapses did not rest which would normally occur during deep sleep. Our synapses get excited during the day as response to a variety of stimuli throughout each day. With sleep, these synapses restore themselves and activity normalizes. Without a restorative period of time, the synapses stay maximally excited for too long a period. This state inhibits neuroplasticity which means learning new things is no longer possible. Learning efficiency was saturated in the strongly excited area of the brain which inhibited learning new motor skills.

To further ensure they had located the right area of the brain responsible for deep sleep, the researchers conducted the experiment again this time assigning the same tasks as in the first study, but this time manipulated a different region of the brain. There was no change in the results of the participant?s performance.

The study revealed that poor sleep keeps the brain?s synapses excited by blocking the brain?s ability to learn. This is the first study to reveal the connection between deep sleep and learning efficiency. According to Reto Huber, Professor at the University Children?s Hospital in Zurich, the significance of the study also helped provide valuable information and insight into many diseases that manifest in sleep as well. The hope is that specific areas of the brain associated with a variety of diseases can be manipulated.