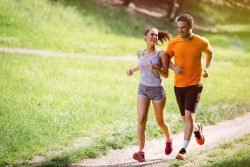 Running keeps bone marrow young! Researchers from Deakin University in Australia have found for every 5.5 miles a person runs every week, their bone marrow was one year younger.

They discovered that both groups of runners had the lowest levels of MAT which is desirable. And despite being highly active, the cyclist actually had levels of MAT similar to those in the sedentary group.

In looking at the runners, the team discovered that those who ran 30 or more miles per week had bone marrow that was equivalent to eight years younger than those who were sedentary or didn’t exercise on a regular basis. Their findings suggest that the average person could gain younger bone marrow just through small amounts of running. The team believe that running even 12 miles per week will have a beneficial impact on MAT. And perhaps even less than that will have an impact.

Bone marrow produces blood cells and is a semisolid tissue that is found in the soft part of the bone. Humans are born with mostly red blood cell producing bone marrow. However, as we age this converts into a yellow fatty marrow, also known as marrow adipose tissue (MAT). This type of marrow can negatively affect blood and bone metabolism in areas such as the vertebrae, pelvis, hips, and thighs which can contribute to a variety of chronic conditions such as osteoporosis and diabetes. It also influences fat stores.

The new study suggests a correlation between certain type of exercise and MAT. However it isn’t as simple as simply burning calories. Cyclists in the study who rode more than 93 miles in a week’s time did not show any significant positive impact on MAT.

This suggests that MAT is affected by different rules to the fat stores under the skin. The researchers believe a person also needs the mechanical loading of the spine to impact MAT. Thus the mechanical loading of the spine with running is important. The team believes that it is the pounding of running that makes the difference between that type of exercise and cycling or swimming.

Although marrow tissue is a part of bone, the study’s findings are distinct from other studies showing that weight bearing exercise is good for the health of bone. Bone is structurally important for the attachment of muscles and support of the body. MAT on the other hand, has a variety of regulatory roles such as blood cell production, fat stores and bone tissue. Increases in MAT negatively impact both bone and red cell production.

How much running does a person need to keep their bone marrow young? While the team says that is an area that needs to be further studied, is is less than a person might think.

While cycling did not show an impact on MAT and the team believes the same would apply to swimming, there are a variety of load bearing sports that will likely have an impact. This would include soccer, basketball, tennis and volleyball. And the data did show that high impact activities like jumping and sprinting also had a positive impact on MAT.