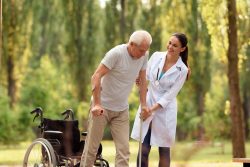 In new research, a team has shown a map that will identify which parts of the spinal cord trigger knees hips, ankles, and toes and the areas that put movements together. Along with an electrical spinal implant, the dream of helping people walk again could someday be a reality, even in the next decade.

Vivian Mushahwar, the lead researcher, is the director of the SMART Network which is a collaboration of more than 100 University of Alberta learners and scientists who work at intentionally breaking disciplinary silos to think of unique ways to tackle neural diseases and injuries. Her goal has been to help people walk again and has been working towards that goal for the past 20 years.

Mushahwar’s idea is to fix paralysis by rewiring the spinal cord. However, the spinal cord also involves biology so it isn’t just a matter of reconnecting a cable. Three huge feats are needed. The brain has to translate signals, the spinal cord has to be figured out and controlled, and the two sides have to be talking again.

Mushahwar believes the spinal cord has a built in intelligence. There is a complex chain of sensory and motor networks which regulate everything in our bodies. The brain stem’s contribution is basically to signal “go” and “faster”. The spinal cord isn’t just moving muscles, it also gives people a natural gait.

A variety of researchers have tried different ways to restore movement. Through sending electrical impulses into the muscles of the leg, it is possible to enable people to walk or stand again. However, the effect is strictly mechanical and not very effective.

Mushahwar’s research has been focusing on restoring lower body function following severe injuries using a tiny spinal implant. Hair like electrical wires are plunged deep into the spinal grey matter which sends electrical signals to trigger the networks that already know how the hard work is done. They believe that intraspinal stimulation itself will get people to start walking longer and longer and perhaps even faster.

The spinal map the team has showcased, shows that the spinal maps have been remarkably consistent across the animal spectrum, however further work is needed before human trials can be started. Human trials will be a massive undertaking, so further work with animals needs to be done first.

Being able to stand and walk has a variety of health benefits. Both improve bone health, improve bladder and bowel function and reduce pressure ulcers. Standing and walking could also help treat cardiovascular disease which is the main cause of death for people with spinal cord injuries. For people with less serious spinal injuries, an implant could be therapeutic and could remove the need for months of grueling physical therapy regimes that typically have limited success.

The next steps for Mushahwar are to fine tune the hardware, miniaturizing an implantable stimulator and getting Health Canada and the FDA approvals for clinical trials. Previous research has tackled the challenge of translating brain signals and intent into commands to the intraspinal implant. However, the first generation of the intraspinal implants will require a patient to be able to control movement and walking. Future implants might include a connection to the brain.

Functional organization of motor networks in the lumbosacral spinal cord of non-human primates.