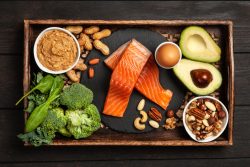 A study which involved 2,622 adults participating in the U.S. Cardiovascular Health study from 1992 to 2015, has found that higher blood levels of omega 3 fatty acids found in seafood are linked to a higher likelihood of healthy aging in older adults. With populations around the world living longer, there is a significant and growing focus on aging in a healthy manner. This means a meaningful lifespan free of major chronic diseases and with good mental and physical function.

Prior studies have suggested that omega 3 polyunsaturated fatty acids that come from seafood and plants may produce beneficial effects on the body which could promote healthy aging. However, results have been inconsistent.

The recent research team set out to study the association between circulating blood levels of the fatty acids and healthy aging in older adults.

The study included 2,622 adults with the average age at the beginning of the study 74 years. 11% of the participants were from non white groups and 63% were women. Blood levels of the fatty acids were measured at baseline, 6 years and then 13 years. The fatty acids included EPA, DHA, DPA, and ALA. The primary dietary source of EPA, DHA and DPA came from seafood and the primary sources of ALA were mainly in plants such as nuts, leafy greens and seeds.

Based on the measurements, the participants were placed into five groups of circulating blood fatty acid levels from lowest to highest.

Through a review of diagnostic test and medical records, the team discovered that 89% of the participants experienced unhealthy aging throughout the study period. 11% experienced health aging which was defined as survival free of major chronic diseases and without physical or mental dysfunction.

After taking into account a range of economic, social and lifestyle factors, the team found that levels of the seafood derived EPA in the highest group was associated with a 24% lower risk of unhealthy aging compared to levels in the lowest group.

For levels of DPA, the top 3 groups were associated with an 18 to 21% reduction in the risk of unhealthy aging. However, the seafood derived DHA and the plant derived ALA were not associated with healthy aging. A possible explanation for this could be that fatty acids help to regulate heart rate, blood pressure and inflammation.

No firm conclusions can be made about cause and effect as this was an observational study, and they could not rule out the possibility that some of the risk could be due to other unmeasured factors.

The study had a follow up period of up to 22 years with results remaining largely unchanged after further analyses. As such, they team says that among older adults, higher levels of circulating omega 3 fatty acids from seafood were associated with a lower risk of unhealthy aging.

The findings certainly encourage the need for further studies into plausible biological interventions and mechanisms related to omega 3 fatty acids to support healthy aging and also support guidelines for increased dietary consumption of seafood among the older adult populations.