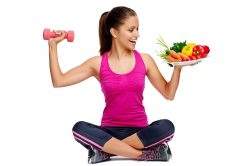 Researchers at the University of Michigan have answered the question that fitness experts and scientists have wondered about. Does nutrition or exercise have the biggest impact on bone strength?

The exercise employed was treadmill running for 30 minutes at 12 metres per minute and this lasted for eight weeks. At the end of the eight week period, the mice that consumed the supplemented diet had more BMC (tibial cortical bone mineral content) and vBMD (bone mineral density) than the mice that were in the controlled diet group.

It was additionally noted that exercise was only able to increase BMC when the supplemented diet was also included. At the end of 16 weeks, both exercise and non-exercise groups of mice that were fed a supplemented diet were able to maintain greater tibial cortical BMC as well as vBMD as compared to the mice in the control group.

David Kohn, a professor in the schools of engineering and dentistry, noted that long term mineral supplements will lead not only to increases in strength and bone mass, but also the ability to retain the increases even when training stops. And as people age, it is much easier to maintain diet over exercise.

Another finding was that diet alone will have positive effects on bone even when exercise isn’t happening. This was a big surprise to the team who anticipated exercise with a pretty ordinary diet to prove to have bigger gains in a persons bone strength.

Their data indicates that long term use of a mineral supplemented diet can be beneficial in the prevention of bone loss and strength even if you aren’t exercising. Combining both mineral supplementation and exercise serves to amplify the gains.

Previous studies looked at the effects of dietary calcium. The current study looked at increased calcium along with increased phosphorus and discovered benefits by increasing both. This doesn’t mean people should start running out and buying phosphorus and calcium supplements since their findings don’t directly correlate from mice to humans, but it does give the team a concept to study.

It is well known that peak bone mass occurs in people in the early twenties and then begins to decline. The goal then is to figure out how to maximize bone mass at an early age so when bone mass begins to decline, people are able to start in a better position.

The researchers also performed a variety of mechanical assessments that relate to the bone. The mechanical quality of bone tissue doesn’t always correlate with bone mass. The mice were tested following eight weeks of exercise training and a normal diet or a supplemented diet and then following another eight weeks of no training.