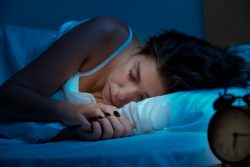 Neuroscientists from Western University’s Brain and Mind Institute have released early results from the world’s most intense sleep study which reveals that sleeping an average of 7-8 hours per night have better cognitive performance than people that sleep less than that or more.

The article published in SLEEP, shows results from the study which was started in June 2017 with more than 40,000 people from all over the world included in the scientific investigation that was online. The study involved a very detailed questionnaire including a list of cognitive performance activities. The goal was to find out the sleeping habits of people all around the world. Sleep studies of a smaller degree have been conducted in laboratories, however this study’s goal was to find out what sleep is really like.

The study involved a very diverse group of participants which allowed the researchers to compare sleep deprivation on people of different professions, lifestyles and ages. The extensive questionnaire asked questions about where they lived, education level, medications they took and other information that helped the team consider factors that would contribute to results of the study. The participants also underwent 12 established cognitive tests so that mental ability and amount of sleep could be correlated.

About one half of the participants reported that they slept less than 6.3 hours each night. This is about sixty minutes less than what the study recommends for healthy sleep habits. One very surprising revelant factor was that participants who had slept less than four hours performed like they were nine years older than they were.

An additional interesting discovery was the fact that adults were affected equally. People who got seven to eight hours of sleep per night showed the highest functional cognitive behavior and this was regardless of age. The impairment related to too much or too little sleep was not dependent on age. However, older adults were much more likely to have shorter sleep duration which meant they were much more impacted by sleep deprivation than the other age groups of people.

Less sleep and more sleep both negatively impacted several cognitive functions such as information manipulation for problem solving and recognizing complex patterns. Verbal ability and reasoning were the most impacted by sleep with short term memory ability being barely impacted.

The study confirmed that getting 7 to 8 hours of sleep per night is optimal. Data from a previous study conducted on about one million people showed that both sleep deprivation and too many hours sleeping should be avoided for optimal health of the heart. 7 to 8 hours of sleep is recommended to keep the brain performing at its very best.

The studies findings show how significant real world implications are. Many people including those in positions that require a lot of responsibility may operate on too little sleep which may impair problem solving, reasoning and communication skills on a regular basis. Getting too much sleep on the other hand can be just as damaging.