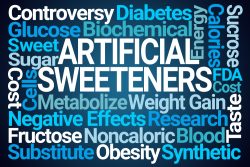 A collaborative study conducted by researchers at Ben Burion University of the Negev and Nanyang Technological University in Singapore, has shown the relative toxicity of six different FDA approved artificial sweeteners (sucralose, aspartame, saccharine, neotame, advantame and acesulfame potassium k) and also 10 sport supplements that contain these ingredients. Bacteria found in the digestive system became toxic when exposed to high levels of the artificial sweeteners such as just one mg/ml.

The team modified bioluminescent E coli bacteria which will illuminate when toxicants are detected and thus become a sensing model representative of the complex microbial system. This provided evidence that artificial sweeteners consumed regulartly adversely affects the activity of gut microbe which can lead to a variety of health issues.

The gut microbial system plays an important role in human metabolism. The study found that mice treated with one artificial sweetener, neotame, had different patterns than those not treated and several important genes found in the human gut decreased. Also noted were high concentrations of several fatty acids, cholesterol and lipids in the mice treated with this artificial sweetener.

Artificial sweeteners are found in many food products and diet soft drink beverages. People consume these added ingredients without even knowing it. This is especially common with athletes who devote a lot of time to their diet which often includes sport supplements taken to improve their physical performance. Additionally, artificial sweeteners have emerged as environmental pollutants and are found in surface and drinking water and in groundwater aquifers.

The study results may help in understanding the toxicity of these sweeteners and the possible negative affects on the gut microbial community and the environment. The bioluminescent bacteria panel might also be used for finding artificial sweetners that could be in the environment.