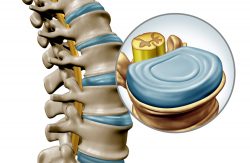 In the world of aging research, using the Yamanaka stem cell factors for cellular reprogramming has become very important. Yamanaka factors are four master genes that were discovered by Drs. Kazutoshi and Shinya Yamanaka and are used to reprogram cells back to an embryonic state. It has now been suggested that transient exposure to them may be the key to treating many health problems such as vertebral disc degeneration.

These genes have the ability to turn back the biological clock in old cells by reprogramming them. By limiting the length of treatment cells can be returned to a younger state without going all the way back to embryonic. That makes cells epigenetically younger and partially reverses cellular aging.

It has been previously shown in living animals by using the Yamanaka factors, that they can reverse the biological age of cells. New research is now ongoing to make this technology safe enough for humans. This could have the potential of rejuvenating tissues and organs that have aged, therefore, changing the future of aging.

As it relates to the back, intervetebral disc degeneration (IDD) is closely associated with lower back pain. This condition is where the bones of the spine and the discs that separate the vertebrae break down. It leads to pain in the back, neck and even in the legs and hands. It causes loss of mobility and is an extreme burden to society.

This study examined using the Yamanaka factors as a potential therapy for IDD. Using a mouse model they tested short-term cyclic exposure. They found that the progression of IDD was inhibited with several treatments.

They also took a look at the jelly-like substance that is located in the center of an intervertebral disc. It is used to distribute hydraulic pressure between the discs when movement or load is put on the back. When partial cellular reprogramming was used it resulted in preventing characteristics that were age-related from forming. This was achieved by an increase in the expression of HK2 (hexokinase 2), which activates energy metabolism. This, in turn, promotes the cytoskeleton redistribution into a more youthful form.

This new research helps to understand the potential mechanisms and effects of partial cellular reprogramming in people with IDD. This will help in creating new therapies for IDD and other conditions. It is hopeful that in the future this technology may be able to prevent aging and age-related diseases.