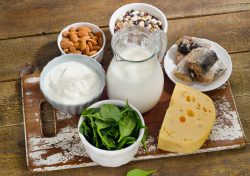 A discovery of an essential nutrient has been found that the body needs to maintain health. The research from Seraphina Therapeutics in San Diego discovered the first essential fatty acid. It is known as pentadecanoic acid, also called C15:0. It has been shown to have broad health benefits and can be found in saturated fat from butter, milk, plants and fish. Currently there is omega-3 and omega-6 fatty acids that are considered essential by nutrition scientists. C15:0 would join these fatty acids and could be the first of other essential nutrients that could now be found.

The new findings are very promising but more research needs to be done. The current results in the study show that when C15:0 was used on over a dozen different human cell systems the results were lower inflammation and less tissue scarring. The human cells that were used mimicked immune disorders, chronic inflammation and fibrosis.

Studies on obese mice found that a 3-month supplementation of C15:0 resulted in a lowering of glucose and cholesterol levels.

C15:0 is found in dairy foods but there are certain types of plants and fish that could also be sources for it. Foods could be fortified with it as well as supplements. Because it can strengthen red blood cells and ease chronic inflammation it might help treat anemia.

C15:0 is considered an odd-chain saturated fatty acid that is better for a person than an even-chain but most people are not getting enough of it. It can be found in whole milk and butter but in the last 40 years people have been discouraged from using these products because of the risk of heart disease. While the even-chain fatty acids are considered unhealthy in large quantities this new odd-chain fatty acid can strengthen outer cells which can protect from inflammation as we get older.

A deeper understanding of the benefits of C15:0 as an important part of a person’s diet needs to be shown. When people cut back on foods that contain it this increases the potential for diseases. Obesity, Type 2 diabetes and metabolic liver disease have been on the increase since nutritionists have suggested cutting back on saturated fat consumption.

In the future, higher levels of C15:0 could be added to beverages such as plant-based milk and foods much like calcium, vitamins and probiotics currently are to further enhance their nutrient value. As more study is done it is going to be shown that not just dairy is a beneficial source of C15:0 but also certain types of plants and fish. This could increase demand for these foods and may help cut the rate of diseases.