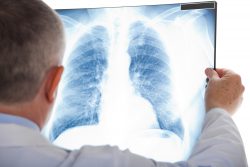 Research highlighting a new type of cell discovered in the human lung could play an important role in treating diseases of the lungs. The study from the Perelman School of Medicine at the Univ. of Pennsylvania have reported their discovery of finding and identifying the new cells.

The new cells are called respiratory airway secretory cells or RASCs. They are found deep in the human lungs and line airway branches near bronchi structures that exchange oxygen for carbon dioxide. Because they are similar to stem cells they can regenerate other essential cells for bronchi to function normally. But if a person smokes or has COPD this regenerative function can be disrupted and, therefore, the RASCs will not be effective. Research can be done to see if this disruption can be corrected.

COPD, which is chronic obstructive pulmonary disease, is quite common and can be devastating. It is not known how or why some people develop it but it progressively damages the bronchi and elevates chronic inflammation. Currently in some parts of the U.S. it affects about 10% of people and around the globe there are approximately 3,000,000 deaths. The treatment is usually steroid anti-inflammatory drugs along with oxygen therapy but they can only slow the process instead of stopping or reversing it.

By finding new cell types like progenitor cells that are injured by COPD, it may help in developing new treatments. COPD is still not understood completely because the current studies use mice and their lungs are missing some important features similar to human lungs.

But now new evidence has been uncovered from the examination of gene activity lung cell signatures showing RASCs present. These cells do not exist in mouse lungs. They found that RASC cells are seretory cells residing near bronchi and are used to produce proteins that are essential to the fluid lining of airways.

The researchers note that studies of this magnitude help discover at the cell-biology level just what is occurring when a person has COPD. From observing similarities between gene activity and RASCs along with a progenitor cell in brochi called AT2 further discoveries can be made. Because of the secretory function of RASCs they may act as precursors for AT2 cells which would regenerate them to keep the AT2 population and bronchi healthy.

When COPD is present in a person, their AT2 cells become abnormal. The RASCs may have defects that enhance these abnormalities creating a faulty RASC-to-AT2 transformation in people with COPD and people that smoke.

With more research there is great possibility that new treatments can be discovered that can restore normal RASC-to-AT2 transformation in people with damaged lungs.

To view the original scientific study click below:
Human distal airways contain a multipotent secretory cell that can regenerate alveoli