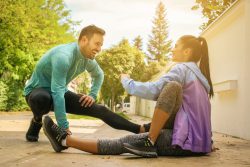 A new study has revealed that people who exercise in the morning between 8:00 a.m. and 10:00 a.m. as opposed to later in the day may be less likely to develop certain types of cancer. This new research may help future research into the timing of exercising as a possible way to reduce the risk of cancer.

Previous research has shown that recreational exercise can reduce the risk of developing many types of cancers. This is important because of the high incidence of people developing cancer and the significant number of people who die from their disease. In the United States, it is estimated that by the end of 2020 1,806.590 people will be diagnosed with cancer while 606,520 people will die from cancer.

With the large number of people developing cancer, any small changes even as small as changing the time of day for exercising could make a significant contribution to the reduction of cancer across an entire population.

The recent study by researchers from the Barcelona Institute of Global Health and the Department of Epidemiology at the Medical University of Vienna studied the exercise habits of 2,795 participants. The participants were a subset of the Spanish multi-case control study that set out to understand factors that cause common cancers in Spain and additionally how to prevent them.

From 2008 to 2013 the team interviewed the participants to learn about their household physical activity and their lifetime recreational activity. At about 3 years later, the team assessed the timing of when the participants exercised. They looked in particular at 781 women with breast cancer and who had responded to the questionnaire about their physical activity and 504 men with prostate cancer who had provided data about the timing of their exercise.

The controls in the study were chosen randomly from general practice records. The team matched them to people in the study with cancer who were of similar age and the same sex. The controls also responded to the follow-up questions in regards to their physical activity and their timing.

The team discovered that people who exercised between 8:00 a.m. and 10:00 a.m. had the strongest possible beneficial effect at reducing prostate and breast cancer. About 7% of the women with breast cancer and 9% of people in the control group engaged in their exercise in early morning. About 12.7% of the men with prostate cancer and 14% of that control group also engaged in early morning exercise.

Melatonin might also be a factor. Research has shown that melatonin may protect against cancer risk and exercise later in the day or at night can delay the production of melatonin.

The team does note that the study has limitations, and they could not detect the small effect the timing of exercise may have with certainty. However, this does not mean it is not important. Cancer is a prolific disease and even small effects when amplified throughout a population can be important.

Regardless, the study clarifies the value of further exploration into the association between the timing of exercise and the risk of cancer. What is clear is that anyone can help reduce their risk of developing cancer by simply engaging in moderate physical activity for at least 150 minutes a week. Exercise is critically important for a variety of reasons. It helps people have more energy, helps them feel better and at affects a variety of biological processes that may themselves reduce the risk of cancer.

Effect of time of day of recreational and household physical activity on prostate and breast cancer risk (MCC?Spain study)