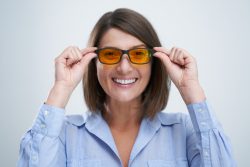 New research has shown that by wearing blue-light glasses right before sleeping a person can get a better night’s sleep and also contribute to better workday productivity. This is especially important since people are learning and working from home as well as binge watching TV more than ever before due to the pandemic.

The team discovered that if a person wears blue-light filtering glasses, it can be an effective way to not only improve sleep but also task performance, work engagement and organizational citizenship behaviors. It also reduced work behavior that was counterproductive. These glasses create a form of physiologic darkness which leads to improved sleep quality and quantity.

Most of the technology people use such as smartphones, computer screens, and tablets all emit blue light. Past research has shown that these devices through the blue light they emit can disrupt sleep. As we currently navigate school and work, people have become more dependent on these devices.

The new research has helped extend the understanding of the circadian rhythm which is a natural, internal process that regulates our sleep/wake cycle and repeats approximately every 24 hours. Before modern times people were not exposed to blue light after the sunset. Wearing blue light filtering glasses produces a similar effect. To get the best results the glasses should be worn starting about two hours before going to bed and until the lights in the bedroom are turned off. Some people put them on right after it gets dark.

Generally speaking, the effects of wearing blue-light filtering glasses are stronger for night owls as opposed to morning larks. Night owls tend to sleep during later times in the day while larks tend to sleep earlier in the day.

Although most anyone can benefit from reducing their exposure to blue light, night owl employees benefit more as they have greater changes between their internal clock and their work time which is externally controlled. The team’s research shows just how and when a person wears the blue-light filtering glasses can help employees to work and live better.

The team’s research discovered that daily engagement of task performance may be related to underlying processes such as the circadian process. The research pushes the chronotype literature to think about the relationship between employees’ performance and the timing of circadian processes. A good night’s sleep will not only benefit workers, it will also help their employer’s bottom lines.

Through two studies, the team collected data from 63 company managers and 67 call center reps at Brazil based offices for a United States multinational financial firm and measured task performance from clients. The participants were randomly chosen to test blue-light filtered glasses or those that were placebo glasses.

Employees can often be asked to work early in the morning which can lead to a change between the externally controlled work time and their internal clock. The team found that their analyses showed a general pattern that blue-light filtration can have a cumulative effects on key performance variables at least in the short term.

The effects of blue-light filtration on sleep and work outcomes.