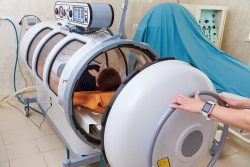 A new study from the Univeristy at Tel Aviv and the Shamir Medical Center in Israel indicates that hyperbaric oxygen treatments (HBOT) in adults that are healthy can stop blood cell aging and also partially reverse the process of aging. From a biologic sense, the blood cells appeared to get younger as treatments progressed.

The team discovered that a certain process of treatments in a pressure chamber using high pressure oxygen can actually reverse two important processes that are related to aging and the illnesses that go along with it. These are telomere shortening which are the protective areas that are at each end of all chromosomes, and accumulating of malfunctioning old cells in the body.

Through attention on immune cells which contained DNA that had been obtained from the participant’s blood, the research showed telomeres lengthening up to 38% and also a decrease of up to 37% of senescent cells being present.

For several years the research team had been involved in hyperbaric therapy and research through treatments in adherence of the process of being exposed to high pressure oxygen at a variety of concentrations inside pressure chambers. Their achievements throughout the years have been improvements of brain functions that are typically damaged by stroke, brain injury or aging.

Currently the study involves studying the impact of HBOT on independent, healthy aging adults and to find if such treatments can ease or even stop and may reverse the process of normal aging at the cellular level.

The teams process composed of 35 healthy people who were older than 64 to a series of 60 hyperbaric sessions over a 90 day period. Each individual provided samples of their blood at the beginning, during and after the end of the treatments in addition to some time following the end of the treatments. The research team then analyzed different immune cells in the participant’s blood samples and the results were compared.

Their findings have shown treatments received actually did reverse the process of aging in two major aspects – telomeres growing longer opposed to shortening at a rate of 20% to 38% for the different types of cells, and the amount of senescent cells in the overall population of cells was reduced quite significantly by 11% to 37% depending on the type of cell.

Telomere shortening is currently thought of as the Holy Grail of the process of aging. Researchers throughout the globe are aspiring to develop environmental and pharmacological interventions that would result in telomere elongation. The HBOT protocol in the current study has been able to achieve this which proved that the process of aging really can be reversed at the basic molecular/cellular level.

In the past interventions such as intense exercise and lifestyle modifications have been shown to have some limiting effect on shortening of telomeres. In the new study, just three months of HBOT was able to elongate the telomeres at rates much more than any current interventions and lifestyle changes. This pioneering study has opened up the door for more research on the cellular impact of HBOT and its possibilities for turning back the process of aging.