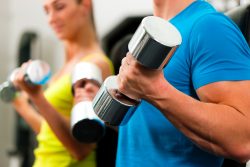 A new study has a great new message…you can help prolong your life by increasing the power of your muscles. The study has shown for the first time that people tend to live longer lives when they have more muscle power.

Power is reliant on the ability to generate velocity and force and coordinate our movement. It is the measure of work performed per unit of time (force times distance). Greater power is produced when the identical amount of work is finished in a shorter period of time or when more work is done during the same time.

Stair climbing requires power and the faster a person climbs the more power is required. Pushing or holding a heavy object needs strength.

Power training is done by finding the ideal combination of weight being moved or lifted and speed. When at the gym most people think about strength training such as weight being lifted and repetitions of the weight lifting without paying any attention to the speed. However, for optimal power training, we need to go beyond the typical strength training by adding speed to the weight lifting.

Our muscle power begins decreasing after about 40. It is known that power is strongly associated to all cause mortality. The good news is that we only need to be above the median for our sex for the best survival with no additional benefit from becoming even more powerful.

The study conducted by the European Society of Cardiology enrolled 3,878 non athletic people aged 41 to 85. The participants underwent a maximal muscle power test using upright rowing exercises between 2001 and 2016. The average age was 59 with 5% of participants over 80 and 68% of these were men.

The highest value that was achieved after two to three attempts with increasing loads was considered as the maximal muscle power and expressed relative to body weight. The values were then divided into quartiles for survival analysis and were analyzed separately by sex.

During the median 6.5 year follow up, 247 men and 75 women had died. Median power value was 2.5 watts kg for the men and 1.4 watts kg for the women. The participants with the maximal muscle power above the median for their sex had the greatest survival (quartiles three and four). Those participants in two and one quartiles respectively had 4 to 5 and 10 to 13 times higher risk of dying compared to those above the median.

This is the first time prognostic value of muscle power had been assessed. Prior research focused on muscle strength by using the hand grip exercise. The upright row exercise was used for the current study because it is a common action as part of daily life such as picking up groceries and grandchildren.

The best way to train to increase muscle power is through multiple exercises for the lower and upper body. A weight should be chosen with the load to achieve maximal power which is not too easy to lift and not too heavy that it can barely be lifted. One to three sets of six to eight repetitions is ideal. The weight should be moved as fast as possible while contracting muscles. A 20 second rest should occur between the sets which will sufficiently replenish energy stores in muscles. The above should be repeated for all exercises for the lower and upper body.