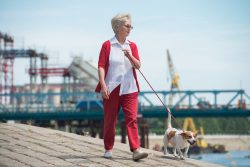 Walking is one of the best exercises a person can do to improve their fitness and health benefits. It can improve heart health and a recent study showed a 32% decrease in death from participants. The study was from 2011-2015 where the participants wore a step counting device to record their walking patterns and daily steps for 4-7 days. They added at least 2,000 extra steps a day in uninterrupted sessions. The devices measured the effects of the bouts of these sessions, which lasted for 10 minutes or longer.

The participants were all women aged 60 or older. This was a national study of heart disease, cancer and long-term disease called the Women’s Health Study. The participants were divided into two groups depending on the number of steps they took. The first group walked with few interruptions for 10 minutes or longer. The second group consisted of walking in short spurts during their regular daily activities. This included doing housework, walking to or from a car or taking the stairs. During a six year period, the researchers tracked deaths from any cause.

The study found they had 804 deaths during the study period. The main finding was that the participants who had taken more steps in short spurts tended to live longer. This was regardless of the amount of steps they had taken in longer, uninterrupted sessions. They saw a 32% decrease in deaths from participants that had taken more than 2,000 steps on a daily basis that was uninterrupted. Benefits to longevity were further associated with taking 2,000 additional steps during sessions.

In a follow-up period, an initial increase of 1,000 steps on a daily basis compared to no steps was associated with a decrease of 28% in death rates. A similar analysis with the same participants showed that taking 4,500 steps daily had a lower risk of death when compared to the least active women. This holds true even for women not engaging in uninterrupted sessions of walking.

More research is needed on other groups such as men, younger women and different ethnic and diverse racial groups to see if the research findings would apply to them also.

To view the original scientific study click below:
Taking more steps daily may lead to a longer life