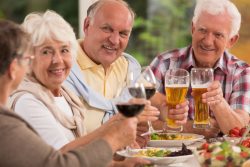 A new study consisting of Australians and Americans over the age of 70 has shown that alcohol is linked to a reduced risk of cardiovascular disease. There was a decrease in mortality from all causes when compared to no alcohol consumption at all. Protection from heart disease can increase with an average intake of 3.5 to 7 alcohol drinks per week.

Excessive alcohol consumption is a significant contributor to the worldwide burden of disease and also a significant risk factor for mortality. However, earlier studies have shown that alcohol in moderation may be linked to a lower risk of CVD (cardiovascular disease). The current landmark study investigated the risk of CVD mortality and events from all causes linked to alcohol consumption in older healthy people.

Populations worldwide are aging. The study was a long-term, large-scale, multi-centre, bi-national study of health and aspirin in older people. The researchers wanted to discover ways for these people to maintain their health, independence, and quality of life as they aged.

Participants did not have have any previous CVD events, diagnosed dementia or physical disabilites that would limit independence. They self-reported any health issues in relation to CVD events such as non-fatal myocardial infarction, coronary heart disease death, fatal and non-fatal stroke, hospitalization for heart failure or non-coronary cardiac or vascular death.

Alcohol consumption was reported by noting days of alcohol consumption per week and the average standard size drinks each day. The study did exclude anyone who might have stopped drinking for a variety of health reasons. The alcohol was calculated by grams each week. The American participants used 14 grams for a standard drink and the Australian participants used 10 grams.

The group was followed for almost 5 years. The study discovered that there was a decreased risk of CVD events for people consuming alcohol levels of 51-100, 101-150, and greater than 150 grams each week. This was in comparison to people that never consume alcohol, regardless if they were male or female.

Consuming 51-100 grams per week was also linked with a reduced risk of mortality from all causes.

The team does say their findings should be interpreted with some caution as the participants were all healthy initially without any prior CVD or other severe diseases. And they could have been more socially and physically active than the larger aging population.

Additionally, earlier evidence has shown that excess alcohol consumption will increase the risk of a variety of other chronic diseases such as liver disease, cancer and pancreatitis.

To summarize, modest alcohol consumption with these participants that were older healthy adults was not detrimental for CVD or overall mortality. Additional research is needed to evaluate causal biological effects of alcohol consumption on health and the possibility of behavioral advantages of social engagement and drinking.

To view the original scientific study click below:
Alcohol consumption and risks of cardiovascular disease and all-cause mortality in healthy older adults