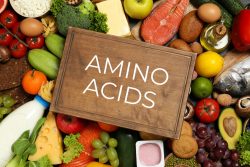 A study has shown that a diet which includes LP7, which is a very specific distinct combination of essential acids, might hinder the development of dementia including Alzheimer’s Disease.

The intake of protein is vital for the maintenance of the function of the brain in older people. Using mice with Alzheimer’s Disease as the model, the team has shown that consuming a distinct combination of Amino Acids can hinder brain cells from dying. It also protects the connections between them and shows a reduction in inflammation which preserves the health of the brain. The combination is called Amino LP7.

Dementia, which is a disease which involves extreme decrease in cognitive function, is manifested by various disorders including Alzheimer’s disease. According to the WHO, about 10,000,000 people around the globe develop this disease every year. This indicates the social impact and highly psychological impact of the disease. It mainly affects the older population and, thus far, effective and simple strategies for preventing it have been elusive.

With the recent research, the team demonstrated that a diet low in protein can speed up the degeneration of the brain in mouse models with Alzheimer’s. However, more significant, the team discovered that Amino LP7 which contains seven amino acids, can slow down dementia and the degeneration of the brain in these mice. The work actually expands upon previous research which has shown the benefit of the Amino LP7 in the improvement of cognitive function.

In the older population diets low in protein are associated with poorer maintenance of the function of the brain. Amino acids provide protein building blocks. The team wanted to see if supplementing with amino acids could guard the brain of older individuals from dementia. If positive, then what mechanisms contribute to the protective effect.

The team first studied the way a diet low in protein affects mouse model brains who had Alzheimer’s which typically demonstrate neurodegeneration and, “Tau”, which are abnormal aggregates found in the brain. They discovered that the mice who were consuming the lower protein diet showed accelerated degeneration of the brain but also showed signs of less neuron connectivity. Surprisingly, these effects from the low protein diet were reversed when Amino Acid LP7 was supplemented to the mice. This indicates that the mix of seven specific amino acids could hinder damage to the brain.

The team then examined just how Amino LP7 affects a variety of signs of degeneration of the brain in the mouse models with Alzheimer’s. The untreated mice displayed higher levels of increased brain degeneration. However, the Amino LP7 treatment subdued neuronal death and therefore reduced degeneration of the brain, although the Tau aggregates were still there. Tau plaques that remain in the brain can be a characteristic of Alzheimer’s and most of the treatments used will target them. But, the team has found that it is able to override the Tau deposition, therefore preventing atrophy of the brain with supplementation of Amino LP7.

Next the team wanted to understand how the amino mix offers protection to the brain. They completely analyzed the changes in the gene-level induced by the amino acid mix. They noted that Amino LP7 reduces inflammation of the brain and also will prevent kynurenine which is an inflammation inducer, from entry into the brain which prevents inflammatory immune cells from striking neurons. They additionally found that the amino mix reduced neuronal death and also improves neuronal connectivity which improves the function of the brain.

The studies results show that amino acids such as the Amino Acid LP7 helps maintain brain balance and prevent deterioration of the brain. This is the first study to find that a specific mix of amino acids can slow down the onset of dementia. And although the study used mice, it shows hope that the intake of amino acids might also alter the development of dementia in people including Alzheimer’s.

The study shows several avenues for the better understanding of how dementia occurs and how it can be prevented. The fact that Amino Acid LP7 will improve the function of the brain in the older population who do not have impairment of cognition, the findings do suggest that it might also be effective in humans who have cognitive dysfunction.

The Amino Acid LP7 is a patent pending supplement and might one day assist millions globally in a dementia-free and improved life.

To view the original scientific study click below:
Neurodegenerative processes accelerated by protein malnutrition and decelerated by essential amino acids in a tauopathy mouse model