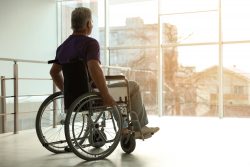 Researchers have now developed an injectable therapy based on nanofibers that enabled paralyzed mice to walk again. It was developed by Northwestern Univ. and harnesses “dancing molecules” to repair and reverse tissue following a severe spinal cord injury.

The therapy sends bioactive signals triggering cells to regenerate and repair. It substantially improved seriously injured spinal cords in five different ways. These were extension of severed neurons regenerated, scar tissue substantially diminished, myelin reformed around the cells, blood vessels became functional delivering nutrients to the cells at the site of injury, and a large amount of motor neurons lived.

Following the therapy the materials biodegrade into nutrients that feed the cells for a period of twelve weeks. After that they disappear.

The study’s goal was to find a therapy to help people avoid paralysis after a disease or major trauma. It’s been a significant challenge due to our body’s central nervous system which has only a limited capacity to repair itself after an injury. The team is seeking FDA approval for their new therapy in people that have few options for treatment.

Currently, at least 300,000 people live with an injury to the spine in the U.S. and life for those people can be very challenging. Fewer than 3% of them that have a severe spinal injury will completely recover and be able to accomplish even the easiest physical tasks. About 30% wind up back in the hospital on a yearly basis which costs up to millions of dollars per patient for average lifetime care.

There are no therapeutics that will regenerate the spinal cord. The team was hoping to create a different outcome when there is a spinal cord injury. This could also create new science that addresses injury to the spinal cord that could also help develop strategies for strokes and other neurological degenerative diseases.

The secret with the breakthrough treatment is fine tuning the molecules motion so they are able to engage properly, constantly moving cellular receptors. When injected in liquid form, the therapy goes immediately into a very complex system of nano fibers that mimic the extracellular network of the spinal cord. Through matching the structure of the matrix, mimicking the motion of biological molecules and then incorporating receptor signals, this synthetic material communicates with the cells.

Neuron receptors and other type of cells are constantly revolving. The major innovation in their research is managing the motion of over 100,000 molecules without the nano fibers. Through making the molecules “dance” and even temporarily leap out of the structures, they can unite better with receptors. Since cells and their receptors are constantly in motion, it is imagined that molecules moving faster would encounter the receptors more often. If the molecules are social or sluggish, they could never come into cell contact.

The team discovered that fine tuning the motion of the molecules motion in the nanofiber system enabled them to be more agile resulting in even better therapeutic efficacy. Formulations of the therapy with added molecular motion created even better performance during in vitro tests using human cells which indicated increased cellular signaling and bioactivity.

Once the molecules are joined to the receptors, the molecules that are moving trigger 2 cascading signals which are both critical to repair of the spinal cord. One of the signals will prompt lengthened tails of neurons which are known as axons to regenerate. Damaging or severing axons could result in paralysis or loss of feeling. Repairing the axons will increase the communication from the brain to the body.

The next signal assists neurons to survive following an injury as it causes other types of cells to proliferate. This promotes lost blood vessels to regrow and feed the neurons and other critical cells to repair tissue. The therapy will also enable myelin to rebuild itself around axons and will reduce glial scarring that serves as a barrier to prevent spinal cord healing.

The signals utilized in this study copy the natural proteins which are necessary to induce the preferred biological responses. Proteins have very short half lives and are quite expensive to produce. Short peptides that are modified bond together by the thousands and are able to live for weeks in order to deliver bioactivity. Thus, the therapy lasts longer and is less expensive.

What they have successfully accomplished with the central nervous system tissues in spinal cord injuries are similar to those found in the brain which is affected by neurodegenerative diseases and stroke. The team believes that this new therapy can possibly prevent paralysis after major trauma to the spine as well as other diseases. But the real discovery is that supermolecular motion is a major factor in bioactivity. By controlling the molecular motion assemblies to enhance signaling of cells, it could be applied across biomedical targets universally.