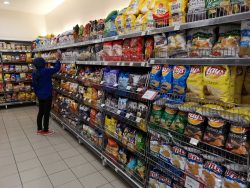 A new study has found that aging rats who were put on a diet of highly processed foods for four weeks showed a strong inflammatory response that also included signs of memory loss. They discovered that adding omega-3 fatty acid DHA reduced the inflammatory effects and prevented problems with memory.

Cognitive problems and neuroinflammation were not detected in younger adult rats that were given the same diet.

The study copied ready-to-eat human foods which are packaged to stay on shelves for a long timeframe such as chips, frozen entrees, snacks and lunch meats that contain preservatives.

Highly processed foods are linked to type 2 diabetes and obesity which suggests the older population should scale back on these processed, convenient foods and instead add in foods rich in DHA such as fatty fish. This is especially important based on the harm to the rat’s aged brains in just four weeks of a diet on highly processed foods.

It is alarming to the researchers to see such drastic effects . The findings show that eating a diet of highly processed foods can produce abrupt and significant memory deficits. In the aging population any rapid decline in memory has a increased risk of progressing into neurodegenerative diseases such as Alzheimer’s.

The lab studies everyday life events such as infections and surgery. In this case the study was on things that may induce inflammation in the brain such as an unhealthy diet. There was specific focus on the amygdala and the hippocampus regions of the brain.

The current study is in addition to earlier research which found that a short-term, high fat diet can develop into brain inflammation and memory loss in older animals. And further research showed DHA levels are lower in the amygdala and hippocampus of the older rat brains.

DHA is an omega 3 fatty acid which is present along with EPA in fatty fish and other seafood. DHA has multiple functions in the brain, one of which is deterring an inflammatory response. This study is the first of its kind to show action against brain inflammation due to a highly processed diet.

The aged rats on the highly processed diet also indicated signs of memory loss when given behavioral experiments that were not shown in the younger rats. The older rats forgot time spent in an unfamiliar place within just a few days which is a sign of problems in the hippocampus with contextual memory. They also did not show any expectant fear to a danger cue which suggests abnormalities in the amygdala.

Human amydala has been connected with memory associations with emotions such as anxiety and fear producing events. When this area of the brain is not working quite right, cues that could predict danger could be missed and might lead to some bad decisions.

The results indicate that supplementation with DHA in the highly processed diets eaten by the older rats was effective at preventing inflammatory response elevations in the brain in addition to signs of memory loss.

The team was not aware of the exact DHA dosage or even the precise nutrients and calories consumed by the rats as they all had unlimited access to their food. Both groups did gain a substantial amount of weight on the highly processed diet, with the aged rats gaining substantially more than the younger rats. Supplementation of DHA did not have any preventative effect on gaining weight linked with consuming the processed foods.

This was a crucial finding and the team cautions against interpreting their results as a go ahead for people to consume lots of highly processed food as long as they take DHA supplements. It is better to prevent a variety of negative effects of high processed foods by focusing on the improvement of the diet overall. These are diets that are shown as being low in fat but they are also highly processed foods. They have no refined carbohydrates and no fiber. People who look at nutritional information need to look at the quality of carbohydrates and fiber. The study shows these are important.