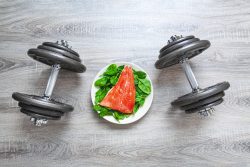 A study published in the American Journal of Physiology: Endocrinology and Metabolism, determined that the health affects of consuming a diet that is high-protein did not affect strength or muscle mass compared to eating a moderate amount of protein while a person is training. The study which involved basic strength-training movements three times a week was conducted with people that had no prior weightlifting experience.

The participants ranged in age from 40-64 years old. The participants were assessed by the team for their strength, blood pressure, lean-body mass, and other health measures including glucose tolerance. These measures were taken before and then after the program. The diet each participant had was randomized into protein that was moderate and protein that was at a high level. Each participant ate a cooked ground beef steak and then consumed a carbohydrate beverage after each session. The participant was then sent home with a protein beverage to be consumed every evening during the 10-week program.

There were two different groups according to the amount of protein they received every day. The moderate-protein group received roughly 1.2 grams of protein per day and the high-protein group received 1.6 grams per day. These amounts were based on the kilogram of body weight each participant had. The two groups had the same amount of calories and beef tallow and dextrose were also added.

The participants did keep food diaries and they were counseled bi-weekly concerning their protein intake and eating habits.

Fecal samples were also taken at the beginning of the program to analyze gut microbes. They were then taken again during the program and again after the end of the program. It has been shown in previous studies that gut microbe composition can be altered in the digestive tract by diet or exercise alone.

It has been recommended by the American Food and Nutrition Board that adults need 0.8 grams of protein per kilogram of body weight each day to deter from getting a protein deficiency. It has been known that as we age, muscle mass declines, therefore, losing strength.

Both groups were supposed to limit their protein intake to the Recommended Daily Allowance. But upon reviewing their diaries, it was revealed that the moderate-protein group was getting from 1.1-1.2 grams of protein per day per kilogram of body weight and the high-protein group were getting 1.6 grams of protein per kilogram of body weight per day. This is twice the amount recommended.

At the end of the 10 week program, the researchers found no significant increase in muscle mass between the two groups. The gains both groups had were roughly the same. The only difference they saw in the two groups was that those in the high-protein group had changes in gut microbes that had been previously linked to negative health issues. They found that the beneficial gut microbes and been increased and the harmful ones had been decreased.

But overall, it was found that high protein consumption does not promote any gain in strength or body composition. Lean muscle mass was not increased any more than consuming a moderate amount of protein.

This result now puts into question whether a person needs to increase their protein intake in middle age to build strength.