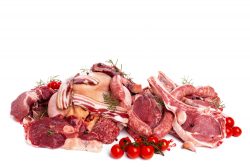 A recent study by the European Society of Cardiology (ESC) was conducted with close to 20,000 people with examination of their consumption of red and processed meat associated with their heart anatomy and function. As an observational study it was discovered that the more red meat a person ate the worse their heart function could be.

Previous studies show there is an increased risk of heart problems or death from heart disease from eating a greater amount of red meat. Therefore, examining how red meat consumption and heart health imaging measures are related were taken into consideration for the first time. The study hopes this will help them understand any mechanisms involved with the previous connections pertaining to cardiovascular disease.

The study did not compare red meat from 100% grass fed animals with meat from those that are grain fed so the results should be interpreted as relating to ordinary grocery store, butcher shop or restaurant red meat which is almost always grain fed. Animals that are grain fed have much higher levels of fat including arachidonic acid which can cause inflammation when consumed in excess and may be a major cause of degenerative disease.

Three measures of heart function and health were conducted. The first being CMR or cardiovascular magnetic resonance. This assesses the heart function that is currently used in clinical practices such as ventricle volume and pumping function. The second measure was CMR radiomics that are used to obtain information from images of the heart correlating to texture and shape. This can indicate the heart muscle health. The third measure was blood vessel elasticity or stretchiness.

There were adjustments made for factors that could affect the relationship. These were age, deprivation, smoking, sex, alcohol, high blood pressure, exercise, diabetes, high cholesterol and a person’s body mass index for obesity.

To further enhance the study, they also tested the association between the consumption of oily fish and heart imaging measures. Oily fish has previously been related to a better heart health. The study showed that more oily fish consumption improved heart function and the arteries became stretchier.