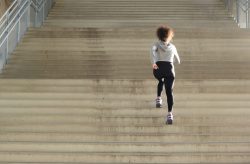 According to new research at University Hospital A Coruna Spain, the time required to climb four flights of stairs provides an excellent indicator of heart health. Cardiologists use climbing stairs in a physical exam for that purpose.

The study team set out to examine the relationship between a daily activity, in this case climbing stairs, and the results obtained from exercise tests in a lab. Their idea was to find an inexpensive and simple way to assess heart health which can help physicians triage patients for additional, more extensive exams.

The study had 165 symptomatic patients referred to it for exercise tests due to suspected or unknown coronary artery disease. Some of the symptoms were shortness of breath during exercise or chest pain.

Participants were asked to run or walk on a treadmill, gradually increasing the intensity and continuing until they were exhausted. Exercise capacity was measured as METs (metabolic equivalents). Following a resting period of 15 to 20 minutes, the participants were asked to climb four flight of stairs (60 stairs) at a fast pace and without stopping or running, and their time was recorded.

The team analyzed the relationship between METs achieved during exercise tests and the time it took to climb four flights of stairs. The people who went up a set of stairs in less than 45 seconds achieved more than 9-10 METs. Earlier studies have shown that 10 METs during an exercise tests correlates to a low mortality rate (1% or less per year or 10% in 10 years). In contrast, people who took over 1.5 minutes to climb the stairs had less than 8 METs which correlates to a mortality rate of 2-4% per year or 30% in 10 years.

During the treadmill tests, the team also generated images of the heart to assess its function during exercise. If the heart is working normally during exercise this would indicate a low likelihood of coronary artery disease.

The team then compared these findings to the results of the stair climbing. 58% of participants who completed the stair climb in more than 1.5 minutes displayed abnormally functioning of the heart during the treadmill exam. In contrast, just 32% of the participants who climbed the stairs in less than one minute had abnormal heart function during the treadmill exam.

Almost 1 in 3 of the study participants who climbed the stairs quickly still showed abnormal heart function which is a possible marker for coronary heart disease. This fact shows why the stair climbing test shouldn’t be used for more comprehensive evaluations. Based on this study, the ability to climb stairs can be used as a crude method to assess one’s physical function that could be predictive of overall heart health.

Stair climbing is often used to assess heart health because it is an exercise that gets a person’s heart rate up relatively quickly. Typically, if a person has an issue with a blocked heart artery, they tend to get symptoms like shortness of breath and chest pain at higher heart rates. Physicians will often use a person’s ability to climb a flight or two of stairs without an issue as a sign that they should probably do okay during surgery.

Stair climbing does have its limitations however. The biggest advantage to this method is its ease. It can be done almost anywhere with very little requirements of personnel or equipment. It is faster and cheaper to do than traditional stress tests and it can be repeated multiple times to track any changes or progress in functional ability.

However, the test is not standardized. The kind of stairs how fast the climbing of stairs is, and the time of effort can differ. And this method significantly limits evaluations of patients with limited mobility and elderly patients who can have more mechanical difficulty with climbing stairs.

The team also note that the correlation between the stair climbing time and exercise capacity (METs) would be similar in the general population. The corresponding mortality rates and heart function through imaging would be more favorable than for patients with symptoms and confirmed or suspected coronary heart disease.