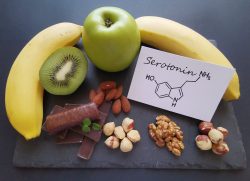 It is well known that intestinal health has a close link with healthy functioning of the brain. Researchers from the University of Tsukuba in Japan are now suggesting that normal sleep patterns may be influenced by gut bacteria through the ability to help create important chemical messengers in the brain such as dopamine and serotonin.

The team’s findings could offer new hope for those who have difficulty sleeping or experience a variety of sleep related health problems such as chronic fatigue, insomnia, and mental fog. They found that depletion of microbes eliminates serotonin in the gut and brain levels of serotonin can affect a person’s sleep/wake cycle. Therefore, changing which microbes in the gut from altering a persons diet can help those who have sleep problems

For the experiment, the team divided 25 genetically identical 8 week old male mice into 2 groups. The mice in the experimental group were given access to water along with 4 commonly used broad spectrum antibiotics. The other group was given water without antibiotics.

After the 4 week trial period, they compared the contents of the intestine between the two groups of mice. Digestion of food breaks it down into pieces and bits called metabolites.

They found a high amount of differences between metabolites in the mice that were microbiota depleted and the group that had been controlled. They found a difference of 200 or more in the metabolyte between the 2 groups. Almost 60 of metabolites that are normal were gone in the mice that had depleted microbiota with the others differing in the amount, with some that had more and some that had less in the group that was controlled.

They then went on to see how these metabolites would normally act. Using enrichment analysis of the metabolome they discovered that the pathways that were biological affected by the treatment of the antibiotics were those involved in neurotransmitter which are the molecules that brain cells use in communicating.

The results of the experiment indicated that the antibiotic treatment group totally closed down the pathway of tryptophan andserotonin. The mice that were microbiota depleted had higher levels of tryptophan than the control mice but almost no serotonin. It therefore, seemed that the gut microbes are a critical factor to the process that produces serotonin from tryptophan in foods. They had found that the mice were deficient in Vit. B6 metabolites accelerating production of the neurotransmitters dopamine and serotonin.

They analyzed the mice when sleeping by looking at the activity of the brain EEGs. They found that compared to the control mice, the mice that were microbiota depleted had more REM and non-REM sleep in the night when mice would be active. The mice that were depleted microbiota also had lesser amounts of non-REM sleep during the day, most of which mice will normally spend sleeping. In other words, this group of mice switched between sleep/wake cycles more frequently than the control group.

The team speculated that the sleep abnormalities were from the lack of serotonin. However, the mechanism that does this still needs to be discovered. They found that the microbe depletion eliminated serotonin in the gut and it is known that that brain serotonin levels can affect sleep/wake cycles.

Future studies using controlled feeding and the administration of certain microbes to determine the gut microbiota would allow researchers to assess each microorganisms individual impact on the sleep/wake cycle. Some research has shown that prebiotics which are nutrients that help support healthy intestinal microbiota, help improve the quality of sleep in humans.