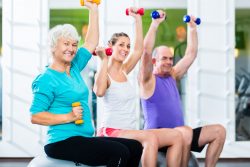 A new study from the University of Warwick and University Hospitals Coventry and Warwickshire NHS Trust, has shown that your age is not a barrier to successful weight loss. People who are obese aged 60 and over can lose an the dame amount of weight as someone younger using only changes in their lifestyle.

The research team hopes that what they have found will help dispel societal misconceptions that prevail in regards of effectiveness of programs for weight loss in people that are older. They also hope to dispel myths in regards to older people potential benefits from working at reducing their weight.

All participants measured their body weight before and again after a variety of lifestyle interventions were coordinated and administered in the obesity serve. The reduction by percentage in body weight across both groups was also calculated.

When the two groups were compared, the team found they were statistically equivalent with the age group under 60 showing an average weight loss by 7.3% compared with a reduction in weight loss of 69% in the group 60 and over. These groups also spent similar amounts of time with the service – averaging 33.6 months in the group over 60 and 41.5 months for those under 60 years of age.

The hospital based service employed only lifestyle based changes which were tailored to each individual. These changes focused on psychological support, dietary changes, and encouragement to engage in physical activity. Most of the people had been referred to the service were obese with BMIs usually over 40Kgm-2.

Over 50 co-morbidities of obesity can be reduced when someone loses weight and includes osteoarthritis, anxiety anddepression and diabetes. Obesity is also linked to poor well being and increased mortality.

Losing weight is important at every age, however as we age we are likely developing some of the co-morbidity weight related to obesity. A lot of these conditions mirror the effects of aging so it does seem relevant that losing weight becomes much more important as we age.

There is a variety of reasons why weight loss in older people is discounted. One of these is what is known as an “ageist” perspective which says that losing weight is not as important or as relevant to older people and the ability of older people to lose weight through increased exercise and dietary modifications.

Older people often feel that hospital-based obesity services are not for them. Policymakers and service providers should appreciate how important weight loss in older people with obesity is. Weight loss in this age group can help with maintenance of well being and health and also with the facilitation of healthy aging. Age should not contribute to clinical decisions in regards to the implementation of lifestyle management with the older population.

The team through their study, has shown that age should not be a barrier to lifestyle changes and management of obesity. Rather than putting up barriers to older people who want to access weight loss programs, clinicians should be proactively facilitating the process. To not do so certainly risks further and unnecessary neglect of older people through societal ageist misconceptions.

Older age does not influence the success of weight loss through the implementation of lifestyle modification.