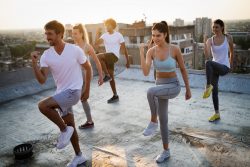 Through exercise the body produces endocannabinoids which help reduce inflammation. This potentially helps with treatments for diseases such as cancer, arthritis and heart disease.

In a recent study, researchers found that intervention with exercise could not only reduce pain in people with arthritis but also lower levels of inflammatory substances which are known as cytokines. Exercise also raised the levels of endocannabinoids that are produced by the body. The way in which exercise caused these changes was by the alteration of the gut microbiome.

The study consisted of 78 participants that had arthritis. Thirty eight exercised for 15 minutes a day for six weeks with movements that strengthen muscles. The rest of the participants did not exercise at all.

Following the 6 week period the participants that had exercised reduced their pain. But what was interesting was that they also showed more gut microbes. These types of gut microbes were shown to produce anti-inflammatory substances, decreased levels of cytokines and increased levels of endocannabinoids.

The study shows how exercise increases the body’s own endocannabinoids which can have a significant effect on many conditions.

It is helpful that a simple lifestyle change such as exercise can modulate endocannabinoids.

To view the original scientific study click below:
The anti-inflammatory effect of bacterial short chain fatty acids is partially mediated by endocannabinoids