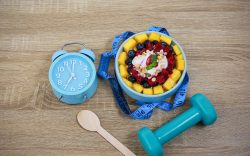 A recent study has shown than exercising at the start of a fast might help maximize health benefits of temporarily going without food and boost overall health benefits.

The team set to find out if they could increase metabolism while fasting with exercise and how fast the body will enter ketosis. Ketosis happens when the body runs out of glucose and will start using fat that is stored for energy. This produces a byproduct known as ketones. Ketones are a healthy source of energy for the heart and brain and also help combat conditions such as cancer, diabetes, Alzheimer’s and Parkinson’s.

The team asked 20 adults who were healthy to complete two 36-hour fasts while staying hydrated. Each fast started after a standard meal. Initially, the fast began without exercise. The second fast the participants performed a challenging treadmill workout. Every two hours and while awake, the participants completed mood and hunger assessments and recorded the levels of BHB (B-hydroxybutyrate) which is similar to a ketone chemical.

The results showed that exercise did make a big difference. When the participants exercised they entered ketosis on the average 3 1/2 hours earlier during the fast and produced 43% more BHB. The thought is that the initial exercise will burn through a considerable amount of the glucose which prompts a faster way to ketosis. Without the exercise, the participants went into ketosis 20 to 24 hours in to the fast.

One study co-author said the hardest time for fasting is the period between 20 to 24 hours. If a person could end the fast before 24 hours and still obtain the same health outcomes it would be beneficial. If exercising was begun at the start of the fast they could get even more benefits.

There are some caveats however to this proposed strategy:

If you consume a huge meal or load up on carbs before beginning the fast, you might not hit ketosis for days even with exercise. Therefore, you should consume your food moderately before the fast.

They also do not know the best frequency for fasting. The are some people who should not fast such as someone with Type 1 diabetes. This could be detrimental to fast 24/7. However, for most people it is perfectly healthy and safe to fast one time or even two times a week for 24 hours or more.

The study which included running on a treadmill for an average of 45 to 50 minutes also did not establish an ideal type or amount of exercise for each person. The researchers believe that overall the more energy that is burned, the better.

A person can get a pretty good estimate of how many calories they are burning with most exercises and the carbs they burn off. Thus, the stage is set for entering ketosis early in the fast.

Also, it is noted that according to the participants, exercise did not seem to affect moods or aggravate hunger during the fast. People can be grumpier when fasting however, the team found that you are not going to feel any worse with the exercise routine.

Click here to view the original scientific study:
The Effects of Exercise on Beta-Hydroxybutyrate Concentrations over a 36-h Fast: A Randomized Crossover Study