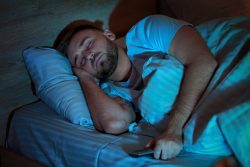 It was found from healthy young people who participated in a sleeping lab study that sleeping for just one night with low light (such as a TV with the sound off) raised their heart rate and blood sugar levels. The low light enters the eyes and will disrupt sleep even though the participants slept with their eyes closed.

Heart rate will normally drop at night which slows down the brain as it is busy rejuvenating and repairing the body. A raised heart rate at night has been shown in many studies to be a risk for early death and heart disease.

Insulin resistance happens when blood sugar levels are high. This is where the body quits properly using glucose and the pancreas works overtime increasing insulin in an effort to overcompensate until it will eventually lose its ability to work at all. Over time, resistance to insulin can lead to to Type 2 diabetes.

Previous research shows a link between light that is artificial at night with obesity and gaining weight. It can also lead to disruptions in insulin secretion, metabolic function and the development of cardiovascular risks and diabetes.

In the study, the team used 20 healthy individuals in their 20’s that slept for 2 nights in a sleep lab. They were in a darkened room the first night not being able to see anything even with the eyes open. All of the participants were connected to devices that monitor a variety of objective measures of quality of sleep. Data could then be obtained with little interference. They all had an IV that had long tubes that connected through a hole to the lab researchers. The blood was then drawn without bothering the sleeping participant.

From recording the brainwaves, the researchers could tell what stage of sleep the participant was in. The team recorded breathing, EKG and their heart rate. Blood was also drawn to measure the hormone melatonin levels during sleep which regulates the body’s circadian rhythm. The light used was not bright enough to lower levels of melatonin.

A randomized part of the group then repeated the same light level for a second night in the lab. Another group slept with a low overhead light that had a glow somewhat comparable to a very cloudy dark night with street lights coming in through a window with their eyelids closed. It is estimated that approximately 5%-10% of natural light could actually find its way though the closed eyelids which is a low level of light. Even the tiniest amount of light decreased rapid eye movement and slow wave sleep, the stages of sleep in which most of cellular renewal will occur.

They also had increases in insulin, heart rate was higher, and the fight or flight, and the rest and relax nervous systems were not in balance, which has been associated to a higher blood pressure in healthy people.

So what to do? Avoid blue light in the bedroom. All curtains and blinds should be closed, all lights that produce any blue turned off and a sleep mask is helpful. You can purchase night lights, light bulbs and flash lights that are blue free if you need any of those in your bedroom during the night. You can also purchase blue blocking glasses to wear for two hours before going to bed. That’s how long it takes after blue exposure stops before your endocrine system begins making melatonin naturally which is much more effective than supplements.

In addition, be aware of the types of lights. Completely ban lights in the blue spectrum in the bedroom such as electronic devices or tablets, smartphones, televisions and laptops.