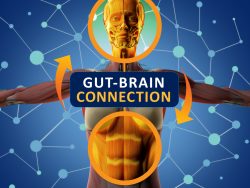 Gut microbiota produce by-products which move throughout the bloodstream and regulate a host of physiological processes that include appetite, body temperature, metabolism, immunity and functions of the brain. Research has discovered in an animal model that hypothalamic neurons will detect differences of activity in the bacteria and change body temperature and appetite accordingly. The findings show that a direct dialog will occur between the brain and the gut microbiota. This is a finding that might point to advanced therapeutic ways to address metabolic disorders such as obesity and diabetes.

The largest bacteria reservoir in the body is the gut. Evidence is growing that acknowledges the degree of interdependence between hosts and their microbiota in the gut and highlights how important the brain-gut axis is. Neurobiologists and microbiologist have shown their expertise on how gut bacteria directly control the activity of certain neurons in the brain.

Researchers put their focus on the NOD2 receptor located inside of primarily immune cells. This particular receptor will detect if muropeptides are present. These are the supports of the cell wall bacteria. It has been established previously that the MOD2 receptor gene coding variants are linked to disorders of the digestive system which includes Crohn’s disease and also mood disorders and neurological diseases. However, this data was insufficient to show a direct relationship between activity of bacteria in the gut and brain activity. This was shown by the group of scientists in the recent study.

Utilizing techniques in brain imaging, the team first noticed in mice that the NOD2 receptor is transported by neurons in a variety of areas of the brain and particularly in the hypothalamus. These neurons’ electrical activity is repressed when contacting bacterial muropeptides from the gut. Muropeptides in the blood, brain and gut are thought to be markers of proliferation of bacteria. By contrast, if the NOD2 receptor is gone, these neurons are no longer suppressed by muropeptides. Therefore, the brain will lose control of intake and food and body temperature. The mice gained weight and are were more susceptible to the development of type 2 diabetes and in particular in older female mice.

In the study, the team have shown the astounding fact that neurons will perceive bacterial muropeptides directly. This job was thought to be mostly allocated to immune cells. It is extraordinary to find that bacterial fragments will act directly on a brain center that is as strategic as the hypothalamus. This part of the brain manages important functions such as temperature of the body, hunger, thirst, and reproduction.

The neurons appear to detect bacterial activity in both death and proliferation as a direct gauge of the impact of intake of food on the ecosystem of the intestines. The excessive consumption of a specific food could stimulate the disproportionate growth of certain pathogens or bacteria which jeopardizes the balance of the intestine.

The impact of muropeptides on metabolism and hypothalamic neurons raises questions on their possible part in other functions of the brain and may help in understanding the association between genetic variants of NOD2 and certain diseases of the brain. This finding paves a way for new interdisciplinary projects between immunology, neurosciences, and microbiology and eventually new therapeutic approaches to metabolic disorders and diseases of the brain.