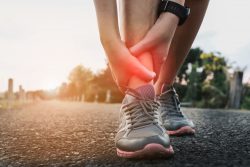 Researchers have developed a promising new approach to combat age related muscle atrophy that is associated with immobility following illness or injury. The technique which was shown in mice, arrests the processes through which muscle will begin to deteriorate at the start of exercise following a period of inactivity.

Exercise and activities that particularly are load bearing, help retain muscle mass which is especially important as we age. Illness and injury can lead to periods of decline in the quality of muscle mass and inactivity.

When we don’t have the ability to contract a muscle, it atrophies. If that immobility remains for very long, there is going to be a significant loss of strength and muscle mass.

Muscles of younger adults and children will tend to quickly recover resuming exercise. However, for older adults, they are deficient in the ability to recover muscles mass following a period of disuse.

The typical prescription is physical therapy to promote the healing process following immobility and injury. However, studies have shown that cellular dysfunction and inflammation in the muscles accumulate and hamper healing.

The team focused on the factors that degrade or enhance muscle mass in the aging process. In an earlier study, the team discovered that injecting pericytes, which are support cells, contributed to restoration of muscle in young mice following an episode of immobility. But the response was not as good in the older mice to these injections and the recovery was impeded.

In the current study the researchers obtained pericytes from the muscles of healthy, young mice and cultivated them in a cell culture. These cells were exposed to hydrogen peroxide. It is a strong oxidant that will promote the creation of extracellular vesicles (EVs) that contain factors that will battle stress and promote the healing process. They also collected EVs to use in therapy.

Extracellular vesicles are required to intercellular communication and can be utilized as biological markers of disease and health. Earlier studies have shown that in addition they are powerful biological mediators of healing and stress. As an example, blood can be taken from young mice, EVs from the blood collected and then injected into older mice and they would then have a younger collection of traits which are known as phenotypes. You can also take healthy EVs from the blood of mice, introduce them into a mouse with diabetes and it will reverse the diabetes.

However there hasn’t been any studies exploring the use of EVs in support of muscle recovery.

Pericyte-derived EVs were injected into the muscles of mice that were young and old that had gone through sustained immobility of muscle in one leg and were starting to reuse these muscles again.

They were successful. The mice that were treated with the stimulated EVs were able to recover skeletal muscle fiber size in both the young and older mice. The research also showed for the fist time EVs that had been derived from muscle pericytes produced a diversity of factors that could combat oxidative stress and inflammation.

To view the original scientific study click below:
Development of a cell-free strategy to recover aged skeletal muscle after disuse