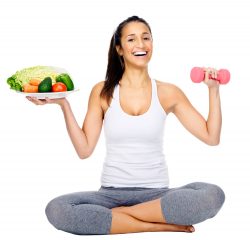 One huge question that fitness experts and scientists are curious about is whether nutrition or exercise has the most positive impact on bone strength. Researchers at the University of Michigan set out to answer that question by looking at mineral supplementation and exercise in mice.

The research team discovered surprising results. They found that nutrition had a greater impact on strength and bone mass over exercise. Even when the exercise training was discontinued, the mice retained gains in bone strength as long as they remained on a mineral supplemented diet.

The long term mineral supplementation diet not only led to increased strength and bone mass, but the ability to maintain the increase even after training was discontinued. Although the test was conducted on mice, in regards to the progression to humans diet is much easier for people to carry on as they age and are not able to do as much exercise or any at all.

Another important finding was that diet alone has benefits on bone even without the exercise. This is another surprise as the team expected that exercise with a normal diet would result in greater gains in bone strength but that wasn’t the case. However, combining the two amplifies the gains.

The team looked at increased calcium and phosphorus and found benefits to increasing both of their supplements. This doesn’t mean that people should start buying and consuming these two supplements. The findings don’t translate directly from the mice to humans. However, it does give the researchers a conceptual place to begin.

Humans achieve peak bone mass in their early twenties with declines after that. The question now is how to maximize the amount of bone mass while young so that when the declines do begin, people are at a better place.

Calcium is one of the major building blocks of our bone tissue, however there are many other minerals and nutrients also needed including magnesium, silicon, manganese, boron, vitamin K2, vitamin D3 and vitamin C. Some of the best bone building foods are green leafy vegetables such as kale, swiss chard, and collard greens which contain many of these nutrients.