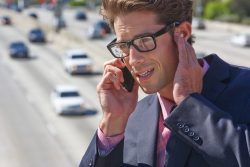 Results from a study conducted by the Barcelona Institute for Global Health have shown that people who are exposed to the highest levels of traffic noise are at an increased risk of becoming obese. Even just a 10 dB increase in mean noise levels was shown to be associated with a 17% increase in developing obesity.

The study began when the researchers wanted to confirm whether results from earlier studies demonstrated a correlation between several markers for obesity and traffic noise. The study involved 3796 adult participants in the population based Swiss SAPADIA cohort study and had also attended a minimum of two follow-up visits between years 2001 and 2011.

The study was based on objective measures including participants height, weight, waist circumference, body mass index and abdominal fat. The data was then analyzed along with estimates of exposure to traffic noise which was developed in the context of the Swiss SiRENE project.

The researchers also analyzed exposure to noise generated from railway traffic and aircraft. They did not find any significant correlation except in long term exposure to the railway noise which was not associated with obesity but was associated with an increased risk of overweight.

The design and methodology of the study were selected to allow the team to review all data from two different perspectives. Cross sectional analysis was used to examine more objective measures and to study the participant population at a specific time.

The other study, a longitudinal design, allowed the team to evaluate how the increased risk of obesity evolved over the time frame of the study. The correlations with traffic noise pollution were consistent in both studies. Overweight only correlated with exposure to noise from traffic in the cross section study. The team did not find any correlation between body mass index and noise exposure which was measured continuously throughout the longitudinal study.

This study adds additional evidence to further support the hypothesis that obesity is affected by traffic related noise. The results of this study which were obtained in a different population from earlier studies were similar. However, the team indicates that additional longitudinal studies are needed to further confirm correlation and to examine some inconsistencies with the data which prevented the team from formulating an explanation that would be accepted by the scientific community.

Repeated exposure to noise pollution is a widespread public health problem. Noise is a stress factor that contributes to communication, rest and sleep. A variety of studies have shown that noise contributes to a risk of a variety of diseases and it alters our sleep and generates stress. Hormone levels can be altered and sleep disturbances deregulate glucose metabolism and will also alter appetite. When sleep patterns are disturbed, the immune system functions can be affected along with control of appetite and expenditure of energy.

The research has shown some indication that reducing traffic related exposure to noise may be a way to combat obesity. For instance noise reducing foam can be installed in corners of rooms to absorb and decrease sound levels.

To view the original scientific study click here: Long-term exposure to road traffic noise may increase the risk of obesity.