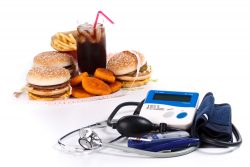 The Yanomami tribe are hunter gatherers and also gardeners in a very remote rain forest region in Northern Brazil and Southern Venezuela. Their diet is low in salt and fat and high in fiber and fruits. Previous studies beginning in the 1980s have shown that obesity and atherosclerosis are virtually unknown among this tribe. They have extraordinarily low average blood pressure which does not appear to increase with age.

This study has shown that the age stability of blood pressure among this tribe begins in early childhood. It is the first study to compare this tribe to the nearby Yekwana tribe which has experienced an exposure to Western influenced lifestyles and diet.

In the United States and most other countries, blood pressure increases with age beginning early in life. The studies results support the thought that the tendency in Westernized societies for blood pressure to increase with age is not part of the natural aging process but might be the result of the cumulative effect of the Western lifestyle and diet.

The team found the blood pressures of the Yanomami tribe to be averaged at 95 systolic over 63 diastolic. In the United States the average systolic is 122 and 71 diastolic. The data shows that blood pressure within the Yanomami population remains very close to the same low levels from one to at least through the age of 60.

The research team involved is this study plans to follow up with a study of gut bacteria among the two tribes to determine if gut microbiome accounts for the tribe’s differences in blood pressure with aging.

To view the original scientific study click here: Association of Age With Blood Pressure Across the Lifespan in Isolated Yanomami and Yekwana Villages