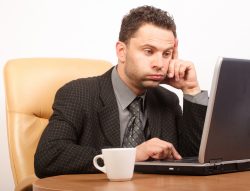 A study conducted by Raphael Vallat, Ph.D. at The University of California, Berkeley, has shown why people have a hard time waking up in the morning. Sleep Inertia or brain fog is real and makes it difficult for some people to drag themselves out of bed in the morning.

Early risers might deny it but as evidenced by the study, brain fog can take quite a while to dissipate and prior to the current study, researchers weren’t sure why it existed. Dr. Vallat asserts that even though the body is awake and moving in the morning, the brain can be asleep in some capacity following the wake up time.

When a person wakes up from sleeping, the brain doesn’t immediately switch from that sleeping state to a fully awakened state. Instead it goes through a transition period called sleep inertia which can last even up to 30 minutes after awakening. During this particular period, the brain will progressively switch from sleep to a normal wakefulness and our mental & cognitive performance does also.
To test this transitional period and prove how real it is, the team had 34 participants take 45 minute naps during which time they entered two periods of a deep sleep which are known as N2 and N3. The participants did not however enter REM (Rapid Eye Movement) sleep which is the deepest type of sleep. Upon awakening, Dr. Vallat tested the participants alertness using two subtraction tests which was one five minutes after awakening and one 25 minutes after awakening.

Similar to anyone who has experienced brain fog, the participants tended to make more mistakes after awakening, and their brain scans revealed why this happened. When a person is awake, the brain switches between two different modes which occur in two separate circuits. One is the task active mode such as when we are being productive or reading, and the second one is non focused task negative mode which is mind wandering. When we are awake we oscillate between the two modes and when the task active mode is functioning, there will usually be a decrease in activity with the task negative circuit.

The research team’s results indicate that during the period of sleep inertia the brain will slowly regain its ability to switch between the two modes divided by functional segregation. They believe it will take about 30 minutes to ultimately achieve this.

Unfortunately, they know there isn’t much a person can do to speed up their wake up process. Even a caffeine boost is not a true solution. There were some results that indicated caffeine increased the functional segregation between the two modes (task active and task negative networks) resulting in an enhancement of the brain’s ability to switch between the two modes. But it seems it does not actually work rapidly enough to cut through sleep inertia.

Caffeine takes about 30 to 60 minutes to reach peak level. Sleep inertia dissipates in about 30 minutes which is before the caffeine would even begin to work on the body. Instead of trying to caffeinate through slow brain functioning, Dr. Vallat suggests the only real fix for sleep inertia is time. Waiting a few minutes before making important decisions or hitting the road running is the best tonic especially if waking up from a very deep slumber.