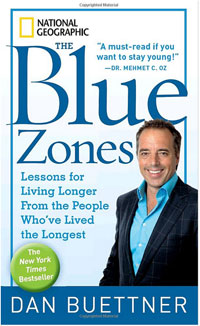 According to U.S. records, the number of individuals over 100 years of age known as Centenarians is skyrocketing! In the US in 1840 there were 90 centenarians which is 1 for every 189,000 people. Today there are more than 53,000 which is 1 for every 5,800 people. To find out why some people live so long, the world was searched for places where there are an unusually large number of centenarians. Those places became known as “Blue Zones” based on a National Geographic book that was published a few years ago.

There were four areas of the world known as Blue Zones in the original book with a fifth more recently added…Okinawa, Japan; Ikaris, Greece; Loma Linda, California; Nicoya, Costa Rico; and Sardinia, Italy. Experts cite that an active lifestyle and a healthy diet as the keys to a longer life. In Blue Zones people are passionate about retaining close family ties and staying closely connected to their neighbors and community organizations.

Okinawa has the highest number of centenarians in the world. Two thirds of the people who reach 100 in this country are able to continue living independently at age 97. These people are three times more likely to reach the age of 100 than maost Americans. Additionally, they have very low rates of stroke, cancer, heart disease and diabetes. Researchers are convinced that their diet is the key component to their longevity.

The diet of Okinawan is high in vegetables and fruits, high in plant proteins, includes seafood and is also rich in whole grains. Scientists from the Eat Lancet Commission say this diet closely resembles their planetary health diet which is a diet that works well for human health and also for reducing the environmental impact of the foods we choose.

Some of the most widely consumed foods in Okinawa include green leafy and yellow root vegetables, sweet potatoes, bitter melon, tofu with modest amount of seafood, lean meat, tea and fruit. This diet is low calorie and high carbohydrate with moderate protein consumption, includes nutrient rich food choices and sparse amounts of refined grains sugar, dairy and meat. A typical meal will include a vegetable stir fry, miso soup, a side of seaweed and freshly brewed jasmine tea.

In addition to a healthy diet, Okinawans maintain close social ties and networks with a grounded sense of purpose. These people remain true to their traditional culture which emphasizes lifelong connections with social and emotional support.

Another Blue Zone is Ikaris, Greece. The residents in this part of the world nap regularly in the middle of the day. None of them exhibit symptoms of depression which non nappers do according to a 2011 study. One study of Greek adults showed that napping on a regular basis reduced the risk of heart disease by close to 40%.

These people of Greece follow a Mediterranean diet which includes natural products produced and consumed on the island of Ikaris. Their diet includes fruits, a variety of vegetables, olive oil, fish, honey, red wine, small quantities of coffee and a variety of herbal teas. Their daily calorie consumption is not high. They have minimal drug use, live a relaxed pace without anxiety and stress, are full of optimism and have strong family and social ties. All characteristics that are abundant in all five Blue Zones!

In Loma Linda, California the proportion of people age 85 or more is more than double the rest of this state. 4 in 10 residents of this city (about 9,000 members) are 7th Day Adventists whose members live longer than any other religious group in America. 7th Day Adventists are 10 times more likely to live to 100 than other Americans. The average male lives to 89 while the average female lives to 91. Both are averages of 10 years longer than the American average. This group of people believe in taking care of their bodies which they do through exercise, healthy diet habits and their close ties to their religious community.

They avoid smoking and alcohol while encouraging exercise and a life full of activity. Their diet typically includes nuts, green salads, fruits, legumes, whole grain cereals and polyunsaturated fats. Many are vegetarians and those who are not eat a low meat diet. They avoid foods high in sugar, salt and stay away from refined grains.

The next Blue Zone is Nicoya, Costa Rica which is known as one of the happiest places in the world! In this area of the world a man at the age of 60 is twice more likely of hitting 90 as a man living in America, France or Japan and residents frequently reach the age of 100. Once again, their long lives are attributed to their healthy lifestyle.

Their largest meal of the day is typically in the morning with their smallest meal of the day at night. They eat little or no processed foods and their diet is primarily plant based. They consume large amounts of beans, vegetables, corn and antioxidant rich tropical fruits. The consume meat only a few times a week and smoking is not common. They also drink a lot of mineral rich water which is very high in calcium and magnesium and get very healthy doses of sunshine on a daily basis.

These people also have a very strong belief in God, and their faith routines help them relieve anxiety and stress and bring tranquility and peace to their lives. They engage in physical activity as a normal part of their daily lives…walking, bicycling, cooking, keeping up their houses, gardening and taking care of animals are all parts of their very active lives.

These residents of Coats Rice focus on family by tending to live with or near their families. Children and grandchildren provide strong support, purpose and a sense of belonging to their elders. This helps Nicoyan elders retain their active lifestyle and positive outlook on life!

Sardinia, Italy is the fifth Blue Zone. There are 21 centenarians in a population of 10,000. In the U. S. there only about 4 centenarians in 10,000. Here Sardinia men live longer than any other men on earth.

There is a large number of sheep herding and farming communities where daily physical activity is strong. Many of these residents walk up to 5 miles a day across rugged terrain. They tend to walk daily to the grocery store. Many Sardinians still fish, hunt and harvest their own food. And even though they are culturally isolated, they remain close to friends and family throughout their lives. They like to laugh and drink wine together!

Their diet like the other Blue Zones is comprised of homegrown vegetables and fruits, beans, fish and milk and cheese from grass fed sheep and goats. Goats milk has components that are thought to protect against inflammatory diseases of aging. And they like their wine! They typically drink a glass or two daily of red wine. Cannonau wine which is the wine produced in this area from the grape known as Grenache, has three times the levels of artery scrubbing flavonoids as other wines.

These people laugh with friends. They gather each afternoon in the street to talk and laugh and the men of this region are famous for their sardonic sense of humor. And their strong sense and support of family keeps the young looking after their elders with many believing that putting an older family member in a retirement home would dishonor the family!

For Americans and others, following the habits of the people living in the five Blue Zones may help improve daily health and longevity. Taking notes about diet, daily exercise and activity; close ties to family, friends and community; purpose; and a positive outlook and gratitude on life are key. It is known that all these factors play a role in aging and age related diseases.