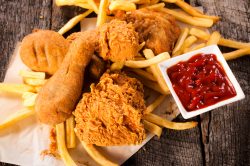 It certainly is no secret that fried food is not a healthy type of food. Almost one third of North American adults consume fast food every day. A new study published in The BMJ shows exactly how eating fried foods affects our health over time. It also shows which fried foods are the worse for us. Previously there has been very little scientific evidence related to the risk of death being linked to fried foods.

The researchers analyzed about 20 years of data for close to 107,000 older women in the United States ages 50 to 79. These women were all enrolled in the Women’s Health Initiative Study. They were asked to fill out detailed questionnaires in regards to their dietary habits between 1993 and 1998. The health of these women was followed by researchers through 2017. During that period more than 31,500 of the women had died. This included 9,320 deaths related to heart disease, 8,358 related to cancer and 13,880 from a variety of other causes.

The research team looked at the specific and total consumption of a variety of fried foods. These foods included fried chicken, fried fish and fish sandwiches and shellfish, french fries, tacos, tortilla chips and variety of other fried snacks. The team also took into account other potentially influential factors such as overall diet quality, lifestyle, income and education level.

The strength of the fried chicken and fried fish might be simply because people consume more of these food items or because of differences in how these foods are prepared. Many restaurants for example reuse frying oil which they cook foods like fried chicken in. This may increase the number of harmful by products which can be transferred to the food. And meats tend to be more deeply fried than other fried foods. However, this does not absolve the unhealthy affects of other fried foods.

Interestingly, consumption of fried food did not appear to correspond to a higher risk of dying from cancer although previous research had connected the two. What that research found was that diet is important for cancer prevention and survival, but not all dietary components appeared to be equally important.

Since this new study was an observational study, it does not prove cause and effect as it was impossible to rule out other factors that affect health. And it did not reflect how women might have changed their diet over time. However, the scientists believe the findings are very strong and very likely apply to populations other than the older women who participated in the study such as younger women and men.

To view the original scientific study click here: Association of fried food consumption with all cause, cardiovascular, and cancer mortality: prospective cohort study