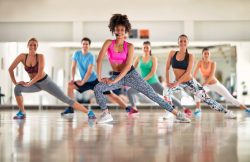 Need another great reason to exercise? A new study has suggested that the level at which a person exercises and is physically active may have an effect on the bacterial diversity of their gut. And this in turn influences a person’s health.

Exercise has been shown to adjust the balance of the gut microbiome. Our bodies are made up of about as many bacteria and microorganisms as our regular human cells. In the colon alone which contains the largest number of bacterial cells, there are about 38 trillion bacteria. Bacteria affects the state of our health and any loss of the bacterial diversity in the gut has been linked to increased risk of disease.

The researchers from Indiana University Bloomington and the University of Alabama at Birmingham conducted the study. They already knew that the efficiency of our circulatory and respiratory systems in delivering oxygen during exercise was associated with larger bacterial diversity. What they weren’t sure about was whether this was in part due to the physical activity or on the other hand a person’s percentage of body fat.

To explore this more, the team recruited 37 participants who had previously been successfully treated for non metastatic cancer of the breast. They choose these individual due to the fact that treatment for cancer typically has a negative impact on metabolic health which includes cardio respiratory fitness.

The study participants were asked to perform graded exercises for the researchers. This is so they could assess their peak cardio respiratory fitness in addition to their total expenditure of energy. The team also collected fecal samples from these participants which were used to analyze their gut microbiota.

The researchers also confirmed that cardio respiratory fitness was connected to about 25% of the variance of the bacterial species diversity. They also noted that this effect was not associated with what was produced by a person’s body fat percentage.

This data indicates that exercise with intensity that is adequately high and will boost cardio respiratory effectiveness, will improve the state of overall health through supporting a more adequately balanced gut.

Although this study involved a small group of women, the research teams believes their findings will help them more forward in finding out how best to apply them to improve the health of others not only for those wanting to improve their overall health, but also for those who are at a high risk for a variety diseases and obesity.

The team is also pursuing an interventional study to see how variations in exercise intensity might influence microbiota diversity of the gut under controlled feeding conditions.

Another earlier study from the University of Illinois found that exercise for just a six week period could produce quite an impact on gut microbiome.

This study began by sampling the gut microbiomes from participants whose exercise program consisted of cardiovascular exercises for 30 to 60 minutes three days per week for a period of six weeks. The gut microbiome was sampled at the beginning of the study then at the end of the study.

At the end of the study the team found the microbiomes had changed. Some of the participants showed an increase in certain microbes and others a decrease. Most had an increase in gut microbes whose job is to assist in the production of short chain fatty acids. These fatty acids will reduce the risk of inflammatory diseases as well as obesity, heart disease and type 2 diabetes.

Following the six weeks of exercise, the participants were then asked to return to their normal sedentary life styles for an additional six weeks. When the gut microbiomes were sampled at the end of this period, the team discovered that the gut microbiomes in the participants had reverted back to their original status before the first six weeks of exercise began.

This finding indicates the kind of impact exercise can have on the microbiome for a relatively short time period of exercise. However, the exercise needs to be done on a regular basis without stopping for the benefits to be realized and to continue. The team hopes to further study their findings by looking at exercise for even longer periods of time to see if this would result in even greater changes in the gut microbiome.