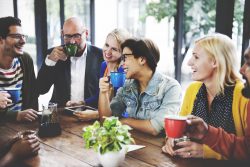 Having a great circle of friends and maintaining strong social networks may just be another key to helping maintain memory and brain health. A study by Ohio State University has discovered that groups of had much healthier brains and better memories than those who were living in pairs.

The study helps confirm the role social connections make in quality of life improvement and preserving memory. Maintaining a large social network can have very positive influences on the aging of the brain says Elizabeth Kirby, assistant professor of behavioral neuroscience and a member of the Center for Chronic Brain Injury at the university. It has already been established that humans maintain a good correlation between social connections and cognitive health. What wasn’t clear was whether having a circle of friends protected people or if people with brain health that was declining were withdrawing from their connections.

The study wanted to answer this question by using an animal model. Some of the mice were were together for three months and had six roommates to allow for complex interactions. Other mice lived in pairs known as the old couple model. All mice were between 15 and 18 months old for the experiment which is an age of usual memory decline in the lifespan of rodents.

When the mice that were group housed were tested for memory they fared much better than the pairs. Moving an object was the test. The mice that were housed in groups remembered better what they had seen and were able to go to the object in the new location. The paired mice had no idea the object had even been moved.

The researchers also conducted a memory test that was maze-based with holes that led to escape hatches. The group housed mice improved with each trial memorizing where the escape doors were and walked directly to them. The coupled mice did not get faster even when the tests were repeated several times over the span of a day. They continued to search each hole rather than remembering where the ones were that led to the escape hatch. The group housed mice were using the part of the brain that functioned for good memory, the hippocampus. With age the hippocampus declines fairly markedly even when dementia is not present. Social ties and exercise are known to help improve memory in this part of the brain.

The study indicated the differences appeared to be due to socialization alone as opposed to previous studies which focused on mice that had environments that were highly enriched comparing them with mice that did not. Further research is planned to examine the molecular reasons for the corelation between improved memory and socialization and brain health. However, the recent study stresses how important social connections are as we age.