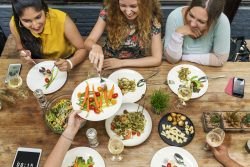 Through a variety of studies involving timing of breakfast and dinner and eating during an 8-10 hour window each day, health benefits have been discovered. From weight loss and reduction of body fat to protection against obesity and metabolic diseases, the research has revealed a host of health benefits to controlled eating.

One study conducted by scientists at the Salk Institute, discovered that mice who lacked the biological clocks thought necessary for a healthy metabolism, could still be protected against metabolic diseases and obesity when their daily access to food was restricted to a 10 hour window. The research suggests that health problems which arise from disruptions to an animals 24 hour activity and rest, which in humans is linked to doing shift work or eating throughout most of the day, can be resolved by eating all calories in a 10 hour span.

For many people their day starts with some coffee upon awakening in the morning and doesn’t end until a snack at bedtime 14 to 15 hours later. Restricting food consumption to 10 hours per day and then not eating the rest of the time lends itself to better health says Satchidananda Panda, a Professor in Salk’s Regulatory Biology Lab.

All cells in a mammal’s body operate on a 24 hour cycle which is known as the circadian rhythm which are cellular cycles that control when various genes are active. Digestive genes in humans are more active early in the day while genes which control cellular repair tend to be more active in the evening. In previous studies researchers found that mice which were given 24 hours access to a high fat diet gained quite a large amount of weight and also were prone to develop a variety of metabolic diseases including fatty liver, diabetes and high cholesterol. The same mice were then restricted to the high fat diet for an 8 to 10 hour timespan, they became healthy, lean and fit. The results were attributed to the mice being in being able to sync with their internal clocks by eating most of the calories when the genes for digestion were most active.

In the current study, the researchers aimed to better understand the role circadian rhythm plays in metabolic diseases through disabling the genes responsible for maintaining the biological clock in mice, including the liver which regulates many metabolic functions. The genetic defects in these clock less mice, makes them more susceptible to diabetes, fatty liver disease and high blood cholesterol. These diseases were further escalated when the mice were allowed to eat sugary and fatty foods.

To test time restricted eating, the clock less mice were put on one of two high fat diet regimes. One group had access to food around the clock while the other group had access to the same number of calories but only during a 10 hour window. As was expected, the group of mice that ate at any time became obese and developed metabolic diseases. The other group which only ate during a 10 hour window remained healthy and lean despite not having an internal clock and genetically programmed to be morbidly sick. This revealed to the researchers that health benefits derived from the 10 hour window were not only due to restricting eating times when digestive genes were most active.

From previous studies, researchers were under the impression that the biological clock was internally timing the process of turning metabolic genes on and off at predetermined times. And while this may still be true, the research shows that by controlling the mice’s feeding and fasting cycles the internal timing system can be overridden with an external timing system.

The work suggests that the main role of circadian clocks might be to let an animal kmow when not to eat and when to eat. This strikes a balance with sufficient nutrition when the “eat” status and the necessary rejuvenation and repair during the fasting state. When the clock is disrupted as can be seen in humans who work odd hours or when it might have issues due to some kind of a genetic defect, the balance between rejuvenation and nutrition is lost and disease can occur. As a person ages, the circadian clock weakens. This parallels the increased risk for cancer, heart disease, metabolic diseases and dementia.

The good news is that simply making a lifestyle change by eating all food within a 10 hour window can restore balance, help maintain health and stave off metabolic diseases. This finding that a good lifestyle can beat bad effects of defective genes opens up new hope for staying healthy.

The researchers plan to study whether consuming within an 8 to 10 hour timespan may reverse or prevent many age related diseases as well as finding out how the current study on mice can apply to humans.

Another study in regards to controlled eating involved making modest changes to breakfast and dinner times to help reduce body fat. This study led by Dr. Jonathan Johnston at the University of Surrey investigated what impact changing meal times has on dietary intake, blood risk markers for heart disease and diabetes, and dietary intake.

Participants in the study were divided into two groups. One group was required to delay their breakfast time by 90 minutes and have their dinner time 90 minutes earlier than normal. The other group was allowed to eat their meals as they normally would. Blood samples and complete diet diaries were given by all participants before and during the 10 week intervention and were asked to complete a feedback questionnaire immediately following the study. Participants were not asked to follow a strict diet and could eat freely provided it was within a certain eating window.

The researchers found that those who changed their eating times lost on average more than twice as much body fat as those who ate their meals as they normally would. And while there were no restrictions on what the participants could eat, the researchers found that the group who changed mealtimes ate less food overall than the other group. The questionnaire confirmed this with 57% of participants noting a reduction in food intake either due to decreased eating opportunities, reduction in food intake or a cutback in snacking particularly in the evening. The researchers did note that they were uncertain whether the longer fasting time with this group may have contributed to the reduction in body fat.

The researchers also examined if fasting diets are compatible with long term commitment and everyday life. When questioned, 57% of participants thought they could not have maintained the new mealtimes past the prescribed 10 weeks due to incompatibility with social and family life. However, 43% felt they would consider continuing if eating times were a bit more flexible.

Although the study was small, it did provide researchers with invaluable insights into how alterations to meal times can have benefits to the body. Reduced body fat lessens chances of obesity and related diseases and is vital to improving overall health. However, fasting diets can be difficult to follow and can be challenging given most people’s lifestyle. These preliminary findings will help researchers design larger and more comprehensive studies of time restricted fasting.

Both studies summarized above do reveal that changing eating habits can influence a person’s health and help protect against disease and obesity. As more studies involving fasting and eating times are conducted, more insights will be revealed as to further health benefits and how people can incorporate new diet and fasting lifestyles into their everyday life in a compatible manner.