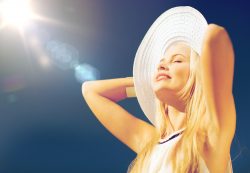 The Journal of the American Osteopathic Association has recently reported a study that discovered nearly 1 billion people around the world are most likely deficient or insufficient in Vitamin D. It is believed that part of the lack of Vitamin D may be due to minimal exposure to the sun by the over use of sunscreen. Chronic Disease is also playing a role in this vitamin deficiency.

Overall people are spending less time outdoors, however when they are they are using large amounts of sunscreen. Sunscreen mitigates the ability of the body to produce Vitamin D and should be used strategically. Some exposure to the sun is necessary for the body to catalyze Vitamin D. People need to be vigilant about protecting themselves against skin cancer, however there are healthy, moderate levels of unprotected sun exposure which is very helpful in boosting Vitamin D.

Vitamin D is also inhibited with a variety of diseases which reduce the body’s ability to metabolize Vitamin D from food. Vitamin D is considered to be a hormone and is generated when skin is subjected to sunlight. Almost every cell in the body has Vitamin D receptors which is why this vitamin plays such a vital role in the body’s functions. From immune system functionality to minimization of inflammation to cell growth modulation and more, Vitamin D is a vital vitamin. Anyone who is Vitamin D deficient or insufficient is prone to bone fractures and weakness of muscles.

The amount of time a person should spend in the sun depends on that person’s idiosyncratic skin pigmentation and geographic location. Lighter skin will synthesize larger amounts of Vitamin D than darker skin. The study discovered that 95% of African American adults might have deficiency or insufficiency of Vitamin D. Variations across races are because of unique levels of skin pigmentation. Maintaining and boosting healthy levels of Vitamin D is as easy as spending between five minutes and half an hour in the afternoon sun just a couple of days per week. Sunscreen with SPF 15 will reduce Vitamin D3 by 99% so it is important to not apply sunscreen during the five to thirty minute sessions in the sun.

Of course the sun is not the only source of Vitamin D. A variety of foods provide Vitamin D some of which are salmon, milk, breakfast cereals, eggs and portobello mushrooms. Supplements can also be used to boost Vitamin D levels and are effective.