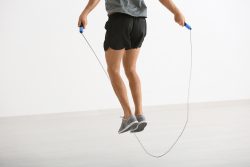 A study led by Massachusetts General Hospital (MGH) has found that even physical exercise in short bursts can create changes in the body’s levels of metabolites that can correlate to and might help gauge a person’s cardiovascular, cardiometabolic and long term health. The study shows how a time of 12 minutes consisting of acute cardiopulmonary exercise can impact more than 80% of circulating metabolites and includes pathways associated to a wide range of beneficial health outcomes.

Much is already known about how exercise can affect vascular, cardiac and inflammatory systems in the body. The new study provides an indepth look at what the metabolic impact of physical exercise by connecting certain metabolic pathways to variables of exercise response and the effects this has on long term health.

The MGH study used data from the Framingham Heart Study to access levels of 588 circulating metabolites prior to and immediately following 12 minutes of exercising vigorously in 411 women and men of middle age. They detected promising shifts in quite a number of metabolites for which levels of rest were previously shown to be linked to cardiometabolic disease.

As an example, glutamate which is a key metabolite linked to diabetes, heart disease and decreased longevity, fell by 29%. And DMGV which is a metabolite associated with the increased risk of liver disease and diabetes was lowered by 18%. The team also found that metabolic responses can be regulated by factors besides exercise which includes a person’s body mass index and sex with obesity potentially conferring partial resistance to the benefits of engaging in physical exercise.

Interestingly, the study found that different metabolites routed with different physiologic responses to physical exercise and could create unusual signatures in a person’s bloodstream that reveal if they are physically fit, similar to the way blood tests currently determine how well the liver and kidneys are functioning.

The Framingham Heart Study which begin in 1948 and now includes 3 generations of participants, allowed the researchers to apply the same signatures used in the current study population to stored blood from previous generation of participants. Through studying the long term effects of metabolic signatures of exercise responses, the team was able to predict the future state of a person’s health and how long they are likely to live.

Through this study, there is a better understanding of the molecular underpinnings of how exercise affects the body and how that knowledge could be used to understand the metabolic architecture around patterns of exercise response. Potentially, this approach can target individuals with high blood pressure or a variety of other metabolic risk factors responding to exercise and then set them on a healthier path early in life.

Metabolic Architecture of Acute Exercise Response in Middle-Aged Adults in the Community.