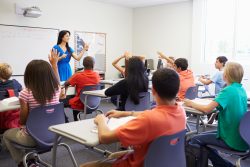 Investing time in education during childhood and early adulthood not only expands career opportunities and can provide progressively higher salaries, but it also conveys benefits to longevity and health. It can also boost the cognitive skills people can develop earlier in life, pushing back the time at which age related dementia will begin to impact a person’s ability to care for themselves.

The new analysis has revealed that even though more extensive formal educations can forestall some of the more obvious signs of age related cognitive deficits, it does not lessen the rate of aging related cognitive declines. Instead, people who go further in school attain on the average a higher level of cognitive function in early and middle adulthood. This means the initial effects of cognitive aging are initially less obvious with the most severe impairments in cognitive health manifesting later than they might otherwise.

The total amount of formal education that people achieve is related to their average levels of cognitive functions throughout their adulthood. However, it is not appreciably related to their rates of aging related declines in their cognition.

This new conclusion refutes the previous long standing hypothesis that formal education during childhood through early adulthood will meaningfully protect against cognitive aging. Instead, the researchers concluded that people who have gone further with their education tend to decline from a higher peak level of cognitive function. They can therefore experience a longer period of cognitive impairment prior to dropping below what the team refers to as a “functional threshold”. This is the point where cognitive decline becomes so obvious that it will interfere with daily activities.

People vary in their rates of age related cognitive declines, however these differences are not appreciably related to educational levels.

For the study, the research team examined data from dozens of prior meta-analyses and cohort studies in an effort to better understand how educational levels affect both the changes in and levels of cognitive function in dementia and aging.

This analysis highlights the importance of formal education for cognitive development over the coarse of childhood, adolescence and early adulthood. According to the team, childhood education has important implications for the well being of people and societies not just during the employment years, but throughout life including old age.

This message from the team may be particularly relevant as governments decide if, when and how to reopen schools during the current COVID-19 pandemic. These decisions could have consequences for many decades in the future.

The research team has concluded that the conditions that shape development during the first decades of life carry great potential for the improvement of cognitive ability in early adulthood and for reducing public health burdens that are related to dementia and cognitive aging.

Education and Cognitive Functioning Across the Life Span.