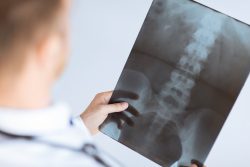 Researchers at the Univ. of CA San Diego School of Medicine report that they have successfully implanted certain grafts of neural stem cells straight into spinal cord damage in mice. They then documented how the grafts mulitplied and filled the site of injury, mimicking the mice’s current neuronal network.

Almost 18,000 people in the U.S. suffer spinal cord injuries (SCIs) every year and another 294,000 people live with an SCI which is usually involving diminished physical function (such as difficulty breathing or bladder control) or some degree of permanent paralysis. It has long been the ambition of scientists to restore lost functions due to SCIs using stem cells.

Scientists knew that injured host axons grow extensively into damaged sites and that graft neurons subsequently spread broad amounts of axons into the spinal cord. However, they had no sense of what kind of activity was happening inside the graft itself and didn’t know if host or graft axons were indeed establishing functional contact or if they only looked like they would.

The research team took note of current technological advances which will let researchers to encourage and record movement of genetically and anatomically defined neuron groups using light instead of electricity. Thus, ensuring the team would know precisely which host and graft neurons were at play without worrying about electric currents moving through tissue and potentially causing misleading results.

The team were shown that even when certain stimulus were not present, graft neurons fired continuously in very specific groups of neurons with highly corresponding activity which was more the same in the neural networks of a normal spinal cord. When they stimulated regenerating axons emitting from the mice’s brain, they discovered that some of the same automtically active groups of graft neurons responded robustly which indicated that those networks have functional synaptic connections from inputs that usually increase movement. Such sensory stimuli as a pinch or light touch also stimulated graft neurons.

This showed that the team could start up spinal cord neurons underneath the site of injury through stimulating graft axons extending into those areas. Through putting together all the results, it happens that neural stem cell grafts have an important ability to self-assemble themselves into spinal cord-like neural networks that then assimilate with the host nervous system. Following years of inference and speculation, the team showed directly that all of the building blocks of a neuronal relay across injuries to the spine can be functional.

The team is currently working on many pathways in an effort to improve the functional connectivity of stem cell grafts towards grouping the topology of grafts to copy those of the normal spinal cord with scaffolds and using electrical stimulation to build up the synapses between graft neurons and host.

While it may still be years off for the precise sequence of stem cells, rehabilitation, stimulation and other interventions, people that have spinal cord injuries now. Therefore, the team is now working with regulatory agencies to direct their stem cell graft path into clinical trials as soon as they can. They anticipate that if all goes well, they may discover a therapy in the next 10 years.