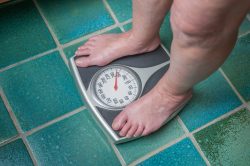 According to a new brain imaging study, when a person’s weight goes up, all regions of the brain will go down in blood flow and activity. The study has revealed that being overweight or obese seriously impacts activity in the brain and increases the risk for Alzheimer’s Disease in addition to a variety of other cognitive and psychiatric conditions.

The study which is one of the largest studies to link obesity with brain dysfunction, included analysis of over 35,000 functional neuroimaging scans using single-photon emission computerized tomography (SPECT) from over 17,000 people to measure brain activity and brain flow. Low cerebral blood flow is the number one brain imaging predictor that a person will develop Alzheimer’s Disease. It is also linked to ADHD, depression, schizophrenia, bipolar disorder, addiction, traumatic brain injury, suicide and other psychiatric conditions.

Distinct patterns of progressively reduced blood flow was found in virtually every region of the brain across categories of normal weight, underweight, overweight, obesity and morbid obesity. The patterns were noted while the participants were in a resting state in addition to while they performed a concentration task.

Of particular interest, brain areas noted to be vulnerable to Alzheimer’s Disease (temporal and parietal lobes, posterior cingulate gyrus, precuneus and hippocampus) were found to have reduced blood flow along the spectrum of classifications of weight from normal weight to overweight, obese and morbidly obese. This is especially concerning news given that the latest statistics show that 72% of American are overweight and of whom 42% are obese.

The team has provided compelling evidence that obesity alters blood supply to the brain to shrink the brain and therefore promote Alzheimer’s disease. This is a very significant advance because it directly shows how the brain responds to our body.

The study highlights the real need to address obesity as a target for interventions that are designed to improve brain function. The team notes that one of the most important lessons learned is that brains can be improved when put in a healing environment through adopting brain healthy habits such as regular exercise and healthy calorie smart diets.

Patterns of Regional Cerebral Blood Flow as a Function of Obesity in Adults.