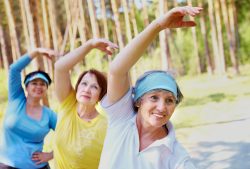 A recent study has asked whether there are links between a person being physically active or being sedentary can be associated with a higher risk of death. The question became – does the risk change at all if a person is genetically predisposed to live a longer life? Earlier research has indicated that low physical activity and more time spent sitting are linked with a higher risk of death.

The study’s goal was to see if there is an association between sedentary time and physical activity with death varied, based on a variety of levels with a person living a longer life based on genetic predisposition.

For this research, a team in 2012, began to measure the physical activity of 5,446 women in the U.S. who were 63 years of age of older. They followed them for 8 years to determine their mortality. The women wore a research grade accelerometer for up to 7 days measuring the amount of time they were sedentary, moving and the intensity of their physical activity and sedentary time.

The ensuing study discovered that a higher level of light activity and moderate to vigorous activity were linked to the risk of death at a lower level. The findings also found that a higher sedentary time was linked with death at a higher risk. These links were consistent among women who had a variety of levels of genetic predisposition for a longer life.

The study indicated that even if a person isn’t likely to live long based on their genes, they can still extend their lifespan by participating in positive lifestyle behaviors such as sitting less and regular exercise. Conversely, even in a person’s genes predispose them to a long life, being physically active is still crucial to achieve a longer life.

With the aging population in the U.S. and longer time spend participating in lower intensity activities, the study supports recommendations for older women to participate in physical activity of any intensity to reduce their risk of disease and premature death.

To view the original scientific study click below:
Associations of Accelerometer-Measured Physical Activity and Sedentary Time With All-Cause Mortality by Genetic Predisposition for Longevity