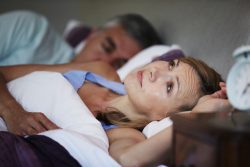 The impact of insufficient sleep on our health is largely unknown. However, a new study has found that people who consistently lose up to 1 1/2 hours per night are at increased risk for immune disorders such as cardiovascular disease or inflammatory conditions like arthritis.

Sleep is a time for the body to rejuvenate and heal itself, but did you know that lack of sleep can actually change how your DNA looks? The research shows immune cells are affected by changes in structure during rest. This could have long term effects on inflammation which leads to chronic diseases. And, it turns out catching up on sleep doesn’t fix what was lost from not getting enough. Instead we need quality sleep each night so our bodies stay as healthy as possible throughout life.

The study shows that sleep plays an important role in determining how well you are protected from immunological health on a long term basis. When we don’t get enough rest or our bedtime is interrupted by outside forces like stress, the immune system becomes weakened and less able to fight off infections. This can cause serious complications such as inflammation which makes matters worse if it occurs during a time when your body needs all its strength for fighting off illness.

The work emphasizes the importance that adults need to consistently sleep seven to eight hours per day to help prevent inflammation and disease.

When researchers tracked the health of 14 adults over six weeks, they found that those who got eight hours sleep each night had more robust immune cells than people that had gotten less sleep. After six weeks with no change in bedtime rituals or work schedules, this group’s resting blood cells were more active than before. Then the same group reduced their sleep by 90 minutes per night for six weeks. They had their blood and immune cells reanalyzed.

The researchers were surprised to find that after six weeks of restricted sleep it had changed the immune cells in people’s bodies. The lack of rest caused more inflammation, which is an adverse effect on our body’s natural defense system. It also altered DNA structure for some participants who had less than eight hours per night throughout their study period.

The team also analyzed sleep in mice. The mice with sleep fragmentation had increased rates of immune system decline, while those who slept unaltered experienced less harmful effects on their bodies. The team also found that this pattern was consistent across humans and mice – both species share similar findings following disrupted slumber patterns over time periods ranging from two weeks to ten months.

The findings from this study show that sleep fragmentation leads to an increase in the production of immune cells, which can result in inflammation and disease. Despite recovering fully after a period without restorative sleep, these mice continued producing more white blood proteins than usual while their original amount remained unaltered . This suggests some kind of rewiring had occurred as well during those interrupted nights, which is a notable finding considering its relevance across all species

The researchers found that even after weeks of sleeping better, their immune systems were still reacting to sleep in an unhealthy way. This is because poor-quality interrupted slumber leaves behind a molecular imprint on stem cells which causes them trouble and leads back into disease or inflammation

The researchers were surprised to find that not all clusters of stem cells responded in the same way. Some grew and developed, while others decreased or aged rapidly. This variation is an important factor in determining who will develop cardiovascular disease as well inflammation-related illnesses like arthritis. It shows how sleep patterns can affect our immune system by varying cell growth rates depending on where they’re located within bodily tissues. The team noticed large differences between groups, while some types prospered despite limited rest whereas other greatly reduced responses when given more opportunity.