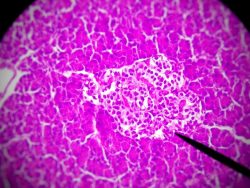 Researchers have made pioneering efforts to fully use the function of pancreatic cells that have been produced from stem cells. The new study has shown that stem cells can form other cells that very closely copy normal pancreatic islets in both function and structure.

Pancreatic beta cells make the vital hormone insulin. One result of these cells being destroyed is type 1 diabetes. This means patients need to replace the lost insulin with many injections on a daily basis.

Secretion of insulin can be restored in people by transplanting beta cells that have been isolated from the pancreas of an organ donor that is brain dead. However, the treatment has not been broadly introduced as it takes at last two donors to cure one diabetic.

Producing functional beta cells derived from stem cells has been attempted many times in the hope of making this treatment more common. But the beta cells that have been produced have been immature so far and the secretion of insulin is not regulated well. This could be part of the reason no breakthroughs have been made on immature cells from any of the clinical trials in the U.S.

One research group have been carrying out developing efforts to optimize pancreatic cell functionality from stem cells.

In the study, secretion of insulin was regulated normally in cells and glucose levels responded. The changes were even better than the pancreatic islets that were used as controls from organ donors.

The survey of the beta cell function is the most comprehensive in the field. In addition to secretion of insulin, the team investigated the function of systems that regulate the secretion including ion channels and metabolism, also connecting their findings to gene expression which occurred during development.

The study helps further improve the production of stem cell islets. This will make it easier to use them in cell therapies and disease modeling.