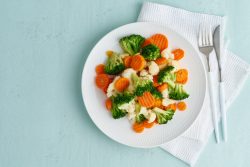 A new study has set out to find a link between the number of vegetables we eat and whether they have any kind of impact on psychological and happiness well-being.

The study involved 75 participants between 18 and 65 years of age. The participants were split into control and test groups and were given a selection of both frozen and fresh vegetables.

The team used the SHS (Subjective Happiness Scale) to assess happiness before and after the 8 week period. The SHS has four questions in which the participants answered in regards to their happiness level.

The SHS scores increased when the amount of vegetables recommended were consumed. They found thay the increase in consumption of vegetables and mostly the ones that meet the Dietary Guidelines were the reason of the improvement in scores on the SHS.

The participants had access to a wide variety of the vegetables to choose from. Because of this, the team could not point out which one particular vegetable is the best for happiness. The team advises that people consume a wide variety of vegetables and from all rainbow colors every week.

Another study showed that children who ate a diet that is rich in fresh vegetables and fruits show better mental health.

The nutrients that make us happier tend to be magnesium, zinc, fiber, iron and Vitamin E which are in abundance in vegetables. These have been shown to help with mental health.

By increasing a diet of plant based foods and reducing the consumption of processed foods, you will not only improve mental health but the diet will give your physical health a wonderful boost.